Tomodachi Life got a techno song called “I don’t like pants on my leggies” stuck in my head for several days straight … I really like Tomodachi Life.

Publisher Nintendo’s latest quirky release is a social-life simulator available today for the 3DS for $35. It has players importing their Miis to live on a island that is all about random wackiness, making friends, and falling in love. Unlike Nintendo’s other social sim, Animal Crossing, Tomodachi Life isn’t about fulfilling responsibilities as much as it is about interacting with your digital citizens to see what happens next.

And sometimes what happens next is a techno song about how awful it is that we have to wear pants.

It’s completely insane all of the time

The first thing you do in Tomodachi Life is bring yourself into the game. I took a few minutes after that to keep importing more … not much later I was playing cards with Cameron Diaz and watching my mother-in-law do a news report about the spreading phenomenon of tree climbing. 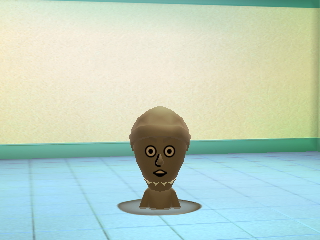 Above: Erick was not a fan of the beef jerky.

A friend’s Mii told me he was hungry, so I gave him some beef jerky. He didn’t like it. In fact, he hated it so much that he turned gray and sank through the floor of his apartment.

Later, Tommy Wiseau, director and star of notoriously terrible film The Room, started asking about my sister-in-law. I think that we’re gonna see a beautiful romance blossom between those two.

Tomodachi Life overflows with those kinds of moments. Sure, you have some fetch quests like getting someone new clothes, but doing that might lead to something funny and strange. The studio also designed the menus so they are streamlined and don’t waste your time with prompts and an overly complex interface.

Really, the best part about the game is its pace and sense of comedic timing. You’re never too far away from the next joke, and the game incorporates all of your Mii characters in surprising ways that work really well because the bits — like the faux news reports — have pretty great delivery.

It’s easy to see the similarities between Tomodachi and The Sims or Animal Crossing, but — in reality — this new 3DS release feels a lot like the Game Boy Advance classic WarioWare, Inc.: Mega Microgame$. In terms of its humor and its relentless oddness, it feels like that minigame collection.

To illustrate what I mean, here’s my cat’s Mii singing the techno hit “I don’t like pants on my leggies” along with President JFK and Jackie Onassis:

It’s easy to share screenshots and characters with others

With a game like this, where something crazy might happen to the digital representation of one of your friends, it doesn’t really mean a whole lot if you can’t share it with them. Thankfully, Nintendo built Tomodachi Life around snapping screenshots at any time, and it made it easy to share ’em, too. 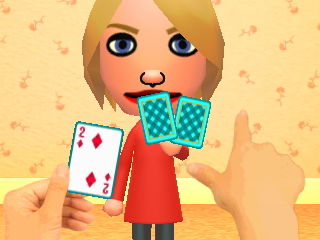 Above: Cameron Diaz invited me over to play cards.

Almost no matter what is happening in the game, you can hit the X button to get a screengrab of the top screen or Y to get the bottom. You can then use the Nintendo 3DS Image Share to send those pics to Twitter, Facebook, or Tumblr.

You can also use the Image Share to send QR codes of your Mii characters so that others can quickly import you and your creations into their game. You can also get Miis through wireless transfer as well as through your Mii Plaza on your 3DS. I was able to quickly build up my roster of Miis to 40 with my family, my friends, and celebrities. I’m really hoping that my mother-in-law will hook up with Egon from Ghostbusters.

Lots to unlock, but it doesn’t take forever either

While humor is Tomodachi’s best feature, it also has a pretty solid progression system. You start off with almost nothing open, and you rapidly unlock more stuff to do. You can also buy different clothes each day, and you can get rare items when you pass another person playing the game in public.

Things are a bit out of your control

In Tomodachi Life, you don’t really have direct control over anything — not even your own Mii. Instead, the action is much more passive, and I could see this bugging some people who want more control over what happens. The game is set up like a dollhouse, but these dolls are taking your inputs and reacting in unpredictable ways. 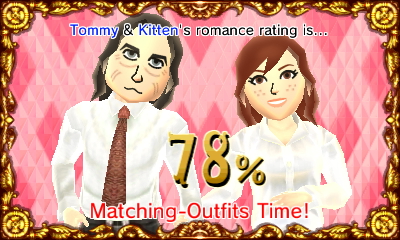 Above: Tommy Wiseau and my wife … what the hell?!

If you want two characters to get together, let’s say Steve Buscemi and the Queen of England, it’s difficult to force that to happen.

For me, this wasn’t really that big of a deal. I’m bummed that it looks like the digital version of my real-life wife is way more into Peter Venkman than she is into my Mii, but I think that all the other random stuff that happens because the game is out of my control makes it worth it. Also, I can get digging Peter Venkman over me in general.

Tomodachi Life reminds me what I love about Nintendo. Another developer might try an experience like this on iOS or Android, but it’s unlikely they would leave it unsullied by in-game purchases. I also doubt that many other studios could nail the effortless humor that makes this so refreshing to play.

It’s not about shooting people. It’s not even about jumping on heads. It’s about mixing people together to see what happens, and I’m not sure anyone but Nintendo could figure out how to make something that simple so much fun.

Tomodachi Life is out now for 3DS. Nintendo provided GamesBeat with a digital-download version of the game for the purposes of this review.