Why settle for just one life? Massively multiplayer online role-playing games (MMORPGs, or MMOs for short) give players the chance to explore, tame, and battle in fantastical worlds unlike anything they’d ever experience in boring, old Earth.

For almost 10 years, World of Warcraft has dominated and defined the genre while quickly making most competition irrelevant. However, we’ve recently seen a few notable MMOs launch that, while unlikely to match Warcraft’s astronomical subscription numbers, could divide the fan base.

Simply put, gamers have as much choice in the MMO field as never before. Below, we compare World of Warcraft with three of its current major competitors; Final Fantasy XIV: A Realm Reborn, The Elder Scrolls Online, and Wildstar.

Note that MMOs are huge games filled with tons of content, so we could never hope to explain every single difference and similarity between these four. However, this basic info should give you a decent idea of how these games tick. 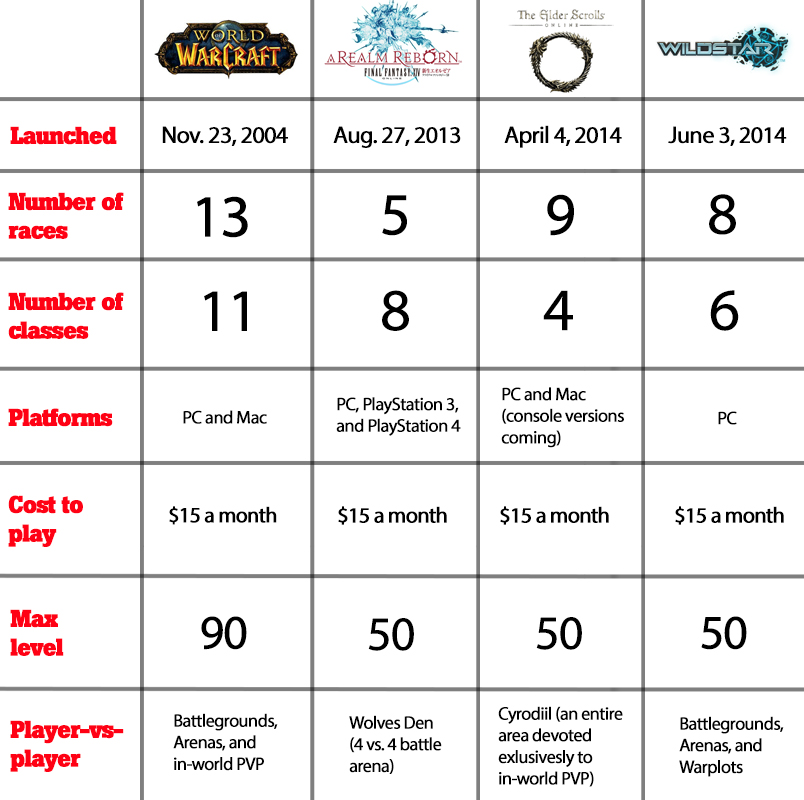 Hail to the king. World of Warcraft currently has a massive 7.6 million players. Sure, that’s not as many as it had during its peak in 2012 (when it had 12 million subscribers), but that’s still a lot of players for a nearly 10-year-old game.

Part of Warcraft’s success has to do with its flexibility. Since its launch in 2004, developer Blizzard has constantly added new quests, classes, races, zones, and content. Some of these come in free updates, but most of the big stuff comes via massive expansions. Blizzard has released about one every two years, with 2012’s Mist of Pandaria being the fourth and most recent. Later this year, we’ll get the fifth expansion, Warlords of Draenor. 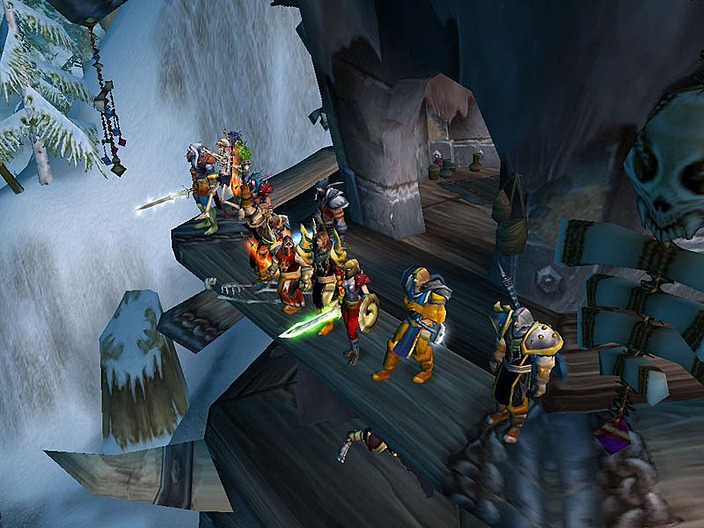 Above: Warcraft players surveying the battlefield.

Gameplay wise, World of Warcraft is pretty basic for an MMO. You pick you hero and class and then progress through solo quests and multiplayer dungeons until you hit the level cap. Of course, WoW doesn’t end there, since hitting the max level means that you can enter Warcraft’s newest and hardest dungeons, which always reward conquerors with the best equipment and loot.

Warcraft’s races belong to one of two factions, the Alliance and the Horde. Players can fight the other side in a variety of player-vs-player environments, including Battleground, which tasks each side with certain objectives (like capturing a flag), more straight-forward Arenas that pit small teams from both sides against each other in fights to the death, and more organic in-world PVP where players fight for control of certain zones.

The original Final Fantasy XIV actually came out in 2010. It was such a disaster that developer Square Enix decided to completely rebuild it, resulting in 2013’s Final Fantasy XIV: A Realm Reborn.

A Realm Reborn essentially works similarly to World of Warcraft. Players fight monsters either alone or with groups so that they can earn experience points and loot. However, A Realm Reborn’s progression system is much more flexible. Players pick a class for their character, but they can switch to a different one anytime they want after reaching level 10. So, if you’re bored with slinging magic spells from a distance, you can quickly become an ax-wielding Marauder. Switching is as easy as changing your clothes and weapon, which designate your class.

It’s also beneficial to train in multiple classes, since you can use certain spells across specializations. Most importantly, you can unlock jobs, a sort of super class, if you meet the level requirements from two specific classes. Maybe that’s all a little confusing, but the point is that it’s all a lot more complex and flexible than World of Warcraft’s simple progression system.

A Realm Reborn is also one of the few MMOs that features cross-play between computer and console versions, and it works surprisingly well with a controller on the PlayStation 4 and PlayStation 3.

However, A Realm Reborn is a bit lacking in the PVP department. Currently, your only choice is the Wolves’ Den, a 4-vs.-4-player arena. More options are on the way, but we don’t know when we’ll get them.

It’s selection of four classes may seem lacking, but each one offers a lot more customization than you’d normally get from other MMOs. You learn skills from your class, but you can also learn abilities from your equipment and guilds. Skills can also mutate, giving you a choice between two different spells or abilities with slight differences.

Above: The Elder Scrolls went online and the world didn’t end.

Also, while skills are an important part of combat, you also depend on normal attacks and blocking. Like in the previous Elder Scrolls, timing and rhythm are important in battle. You need to know when to block a powerful attack and when to charge up a strong hit to put your enemy off-balance.

Still, gameplay is pretty typical for MMO fare, with players completing quests alone or with friends and exploring dungeons with a group. However, ESO features a lot more voice acting and story elements than most of its competitors.

PVP in ESO takes place entirely in one zone, Cyrodiil, where the three factions fight for control of the crown by capturing and holding keeps, towns, and other strategic locations.

Publisher Bethesda originally planned to launch ESO on the Xbox One and PlayStation 4 in April, but those versions got delayed.

Wildstar is the new kid in town, but it’s already making a big impact with its colorful art style and interesting features. At its core, it’s very much a traditional MMO with lots of questing and leveling, but it’s not exactly a World of Warcraft clone.

For starters, you never select a target for your targets. Instead, each ability has a certain area-of-influence that the game displays via cones, circles, and lines on the ground. This makes targeting multiple enemies at once much easier, and it also helps the action feel faster and more organic.

Above: WildStar allows you get just as crazy as it is.

Also, each player picks a certain Path for their character. Paths open up a set of specific quests based on your preferences. For example, Wildstar will task the Explorer to plant flags on hard-to-reach places and to seek out every part of the world. Settlers, however, have to help new towns grow by building structures.

While Wildstar costs $15 a month to play, you can also use in-game gold to buy C.R.E.D.D., a currency that you can use to purchase game time.

PVP in Wildstar is similar to World of Warcraft. You have Arenas and Battlegrounds, but you can also fight other players in gigantic Warplots, which pit two teams of 40 against each other.

These are hardly all the choices you have when it comes to picking an MMO. You can also play free-to-play titles like Star Wars: The Old Republic or subscription-free ones like Guild Wars 2. Each one has its own advantages and disadvantages, and you could spend an entire lifetime trying them all. Who knows which ones will last and which ones will follow the sad path of Warhammer Online and Star Wars Galaxies to extinction.

Still, we’re sure that MMOs will remain a big part of the industry for years to come.