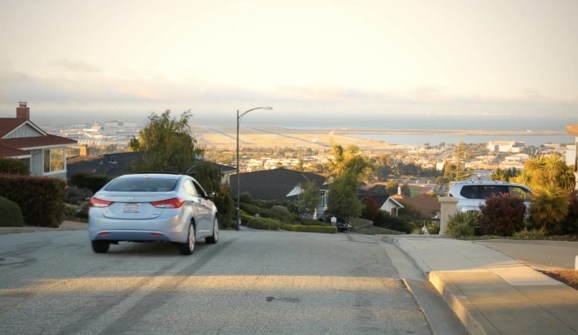 FlightCar has a fascinating shared-economy pitch: Cut the costs of parking at an airport and renting a vehicle from one by letting your parked car double as a rental car.

The service gives you free airport parking as long as it can rent your car out while you’re away. You also get a discounted rental rate on someone else’s car parked at your destination airport.

Sounds handy. But over a year since its March 2013 debut, this Cambridge, Mass., startup still dealing with some issues.

My reservation online couldn’t have been much simpler. I picked a 2009 or newer compact — like traditional rentals, you choose by category — at $76 total for three days, factoring in a discount code and a $5/day insurance add-on. That was some $30 below a comparable rental on Hotwire with five days’ notice.

But after landing and calling FlightCar, I learned the advertised curbside Town Car pickup was off; instead, I had to take LAX’s shuttle to its cell-phone waiting lot.

“We are trying to work through some airport regulations and temporarily suspended curbside pickup at the airport while we make a few tweaks to be in full compliance,” FlightCar cofounder and president Kevin Petrovic explained via email.

FlightCar’s pick-up vehicle at the waiting lot was a clean, late-model minivan. The driver had tried to call me but couldn’t, since somebody gave him my number with two digits transposed.

A short ride later, I reached FlightCar’s LAX shop (next to SilverCar’s Audi-only rental establishment), and things began to smooth out. My ride, one of 200-plus available from FlightCar nationwide, turned out to be a silver 2012 Prius — a slight upgrade — with 19,402 miles on the odometer, a tidy interior, and the radio preset to NPR. It was like any other rental, except without the usual enormous keychain.

I also didn’t have to return the car with a full tank of gas, only with as much as it had at pickup. My refill cost me $13, courtesy of the Prius’s outstanding economy over the 145 miles I ran up — well under FlightCar’s 90-mile daily-average limit.

And with the vehicle unmarred, the $300 hold placed on my credit card vanished as promised. Our return minivan trip would have been direct to the terminal, but we asked the driver to courier us to the adjacent In-N-Out Burger for dinner and planespotting.

So it was an easy, uneventful return.

But what if that turn-signal unbeliever we came across a few hours before the return had successfully completed a test of whether two cars could occupy the same space?

FlightCar touts its $0-deductible insurance for owners. But its default policy for renters excludes comprehensive or collision coverage; our $5 daily add-on came with a $2,500 deductible.

For everything else, you need a credit card or auto insurer to chip in. Whether yours does may depend on a claims adjuster’s goodwill or confusion.

American Express, Visa, and Progressive representatives said they won’t cover their members for use of car-sharing services like FlightCar because they’re not standard car-rental services.

Petrovic, however, said that exclusion isn’t always enforced. “We have … been issued claims payments from AMEX, Visa, and MasterCard.”

Insurance Information Institute vice president Loretta L. Worters warned against people even offering their own cars for FlightCar rental: “If their vehicle is being used as a commercial venture, it should be insured with a commercial policy.”

FlightCar’s protection for owners may not come through either. Occasional VentureBeat contributor Rakesh Agrawal said he was less than thrilled with the repairs when his car was damaged. After a later rental his car came back with scratches and paint marks on the outside.

San Francisco sued FlightCar last May, alleging that its refusal to pay up and pick up at SFO’s rental-car center constituted unfair competition. FlightCar countered that the third-party town cars it hires already pay fees for each stop at a terminal.

“The litigation is still in the discovery phase,” said airport spokesman Doug Yakel. He added that FlightCar declined the deal SFO negotiated with competitor RelayRides: a lower rate with no individual drop-off or pick-up at terminals.

(SFO is RelayRides’ only airport presence with customer pickup; at LAX, I would’ve been on my own to meet a shared vehicle.)

Petrovic said no other airports have sued, but a Sea-Tac publicist said the company would have to use that airport’s offsite rental-car facility. Logan’s PR office didn’t answer an email and call seeking comment.

FlightCar isn’t yet profitable, Petrovic said. With a total of $6.2 million in funding, it doesn’t have the longest runway ahead. The coming months would be a smart time to find sustainable solutions for its insurance and permitting worries.

Would I rent again? I might on a personal trip — if I knew my card would cover potential damage. Without that, much of its cost savings vanish if you buy down your risk with FlightCar’s optional insurance, especially the $10/day/$500 deductible “Premium” add-on.

Would I rent my own vehicle through FlightCar? Maybe: We don’t drive our 2005 Prius all that much, it’s already picked up its share of scratches and dents, and it may even be clean enough on the inside to pass muster. But FlightCar would need to come to Washington first, and it may not be ready to set up shop in the regulatory capital of America just yet.