Alienware is launching its Alpha console-like gaming PC at the Electronic Entertainment Expo (E3) trade show today. But instead of running Valve’s Steam OS, the machine will run Microsoft’s Windows operating system and use an Xbox 360 wireless controller.

The Alpha will ship at $549 during the 2014 holiday season. Valve, in the meantime, has delayed the launch of its Steam Machines project, which includes the Linux-based SteamOS and Steam Controller, until 2015. When that project launches, Alienware will offer a version of the Alpha as a Steam Machine, said Frank Azor, executive director of the Alienware PC gaming division of Dell, in an interview with GamesBeat.

Back in January, Alienware announced that the Alpha system, which had been under design for a long time, would debut this year as a Steam Machine. It was one of 13 hardware makers that depended on Valve’s Steam Machine vision, which was to take games for the PC and run them on a living-room television. The Steam Controller is supposed to make it easy to play mouse-and-keyboard aided experiences, such as real-time strategy games, on the television. But Valve got some negative feedback on the controller, and that is ostensibly the reason for the delay. 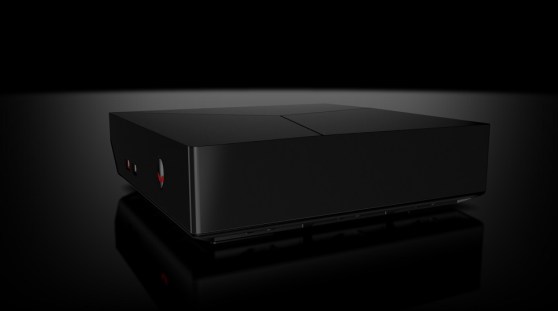 Azor said that the Windows-based machine will be more expensive than originally planned, given the higher cost of the Windows software. But he noted that players will still be able to use the Big Picture mode of Valve’s Steam software to run PC games on a television. Big Picture works with 240 such titles already, he said. The only drawback now is that you won’t be able to play those games with a Steam Controller. There are also 450 titles with partial gamepad support. 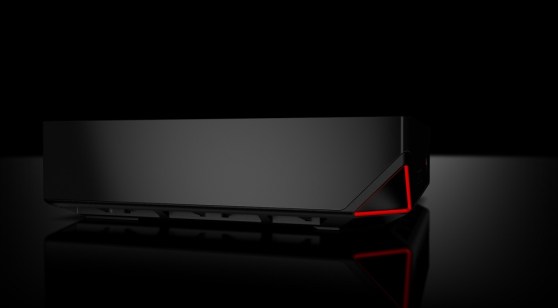 Azor said that Alienware has built its own graphical user interface (GUI) that turns a PC menu into something that can be navigated from 10 feet away. The company isn’t yet showing that controller-friendly GUI. About 450 titles on Steam support gamepads.

One of the surprising things about the machine is that it has a custom graphics chip, not an off-the-shelf Nvidia GPU, with a hybrid of desktop and mobile functions.

Alienware is showing working systems at E3. It is taking orders in the third quarter, and it will ship before Christmas, Azor said.

As for the delay in the Steam Machine platform, Azor said, “Our schedules had been perfectly aligned up to now. When they became disjointed, it was based on customer feedback. There was still work to be done. We debated a delay, but that didn’t make sense. As we saw this, we started bringing up our Windows Steam Big Picture plan.”

The team made changes such as starting the work on the GUI.

“Now we want to make it a true console experience,” he said. “It will be hard to buy a machine that meets or beats this price.”

At E3, Alienware will show 10 unreleased games running on the hardware, some with multiple-gamepad support. Azor said that some game genres will be playable only with the Steam Controller, so people won’t be able to enjoy those experiences on the Windows-based Alpha.

Alienware launched its original living-room gaming machine, the X51, in January 2012. That machine was a great success. Soon after, Alienware started work on the Alpha.

When asked if Valve didn’t have a sense of urgency for its Steam Machines, Azor said, “I wouldn’t say that. The SteamOS Linux build has been out for a while. Big Picture is out. I appreciate their fortitude in delaying the product until it is perfect. How many times do we see companies come out with something that is half-baked and get it right by version two or three. We view this as excellent news, not bad news.” 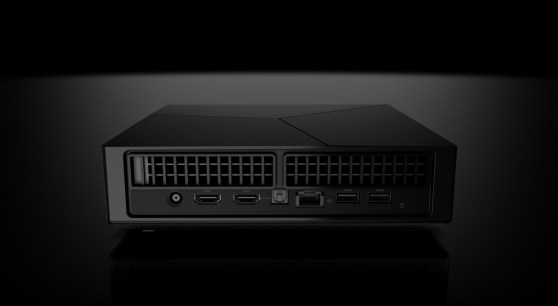 Above: The back of the Alienware Alpha.