Battlefield is turning in its camo patterns and armored tanks for cops, robbers, and a whole lot of money.

But the new theme isn’t the only way Battlefield: Hardline is breaking tradition — it has a new developer behind it, too. Dead Space creator Visceral Games is working on the new shooter in partnership with Battlefield studio DICE. It’s coming out on Oct. 21 for PlayStation 4, Xbox One, PC, PS3, and Xbox 360.

At a recent press event in Santa Monica, Calif., Steve Papoutsis, the general manager and vice president of Visceral, said that the idea for Hardline first came about two years ago when he met the head of DICE — Karl Magnus Troedsson — at an Electronic Arts meeting in Spain (the publisher owns both studios). Their conversation eventually led to the cops-and-robbers idea and to Visceral’s work on End Game, Battlefield 3’s last expansion pack.

At the time, creative director Ian Milham was working on a brand new Visceral project when Papoutsis asked him if he’d like to work on Battlefield: Hardline instead. Although he had “mixed reactions” at first, he was eventually won over by the new setting because he already had his fill of modern military shooters and needed a break from sci-fi games after working on Dead Space. 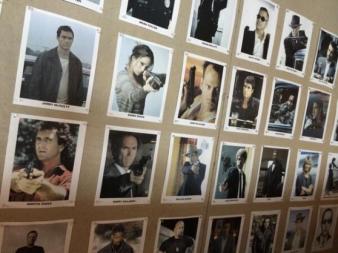 Above: Visceral has a wall full of famous cops and criminals from pop culture.

“I really just want to make a game that pays off on good times and backyard fantasies, and that’s where the whole cops and robbers thing really crystallized for us, because it was so gettable and it wasn’t about who has the nuclear football and who’s going to take over the world. … When I think about a cop fantasy that I can get into easily and have a good time with, I want to be a cop who doesn’t play by the rules,” said Milham. “I want to get yelled at by my captain. I want to do ‘Woop!’ with the siren. I want to use the word ‘perp.’

“And as a criminal, I want to rob banks. I don’t want to take over the world. I want to have a good cause at heart.”

It’s a goofy concept, and hearing about it reminded me of Battlefield’s last spin-off series, Battlefield: Bad Company. Visceral wasn’t ready to show off its cops-and-robbers story, however. Its focus was on Battlefield: Hardline’s new multiplayer modes, and after a brief presentation, I headed to the back of the room to play a few rounds on PlayStation 4.

Getting lost in the chaos

The map we were on was High Tension, which takes place in a (seemingly evacuated) part of downtown Los Angeles. This was Heist mode: Criminals have to break into a defended location, plant explosives on an armored vehicle, steal the loot inside of it, and then drop off the money at two different points. The police have to disarm the bombs and try to protect the vaults. While this sounds a lot like the setup for Overkill Software’s Payday series, they’re actually not that similar at all.

When I spawned in as a cop, I hitched a ride with a teammate, providing cover fire from the passenger seat. Maybe it was because everyone was still getting used to the game, but High Tension felt kind of empty. We crossed a couple of streets before we saw anyone from the opposing team. Traveling on foot was worse. I spent a good chunk of my Heist time running under bridges and passing by burnt-out cars just trying to figure out where everyone was.

I ended up killing only a handful of people, but that was enough to increase my reputation rank and earn me new upgrades, like a better tactical vest and a higher suppression stat. You also get money after every match, and you can spend that either on more accessories for your weapons (scopes, silencers, etc.) or to just buy new guns. Battlefield’s class-based bonuses are still here as well, so you can drop things like extra ammo kits to help out your team.

One cool feature that Hardline keeps intact from Battlefield 4 is the destructive set piece moments that players can trigger if they hit the right structural weak points. In High Tension, a tower crane collapses and tears through the skyscrapers around it as it falls.