When you shake your booty in the next Dance Central, the game’s makers promise it will better capture the movements of your moneymaker better than ever before.

Harmonix is unveiling a new downloadable game dubbed Dance Central Spotlight for the Xbox One. It will take advantage of the more accurate motion-sensing technology in the new version of Kinect for Microsoft’s video game console.

As the fourth game in the series and the first on the new console, Spotlight has improved graphics and venues. The digital-only title will be a test for how accurate the new Kinect can be at capturing dance moves and turning them into fun, real-time gameplay. Kinect is now much better at detecting a dancer’s basic skeleton and interpreting its moves in real-time. That provides for more sophisticated choreography. The company is showing off the game at the Electronic Entertainment Expo (E3) trade show in Los Angeles this week.

Dance Central Spotlight comes with 10 new songs, and it will have a library of at least 50 songs available as downloadable content (DLC) at launch. Harmonix will release weekly songs on an ongoing basis after launch. The company will try to get songs out while they’re still rising in the charts, project director Matt Nordhaus said in an interview with GamesBeat. That’s because the company has done what it can to improve the authoring pipeline. Of course, getting the rights to songs will still require a legal process.

“We’re not talking about price and availability today,” said Nordhaus at a press event. “But we’re OK with saying it’s going to be really easy for people to get into dancing.”

Nordhaus said the new Kinect can detect more joints and things like whether your hand is open or closed into a fist.

The game has a dedicated fitness mode where you can set routines that can be anywhere from 10 to 90 minutes of uninterrupted dancing.

If you have ever purchased downloadable content for the original Xbox 360, you can get that content for free. The teen-rated game is coming in September. 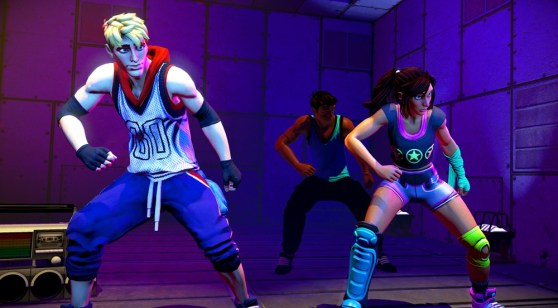