Alien: Isolation made me a cold, hard killer without ever having to pull a single trigger. The alien itself is invincible, but the inhabitants of Sevastopol are not. Given a choice between my life or theirs, I chose mine every single time.

Due Oct. 7 for, PlayStation 4, Xbox One, and PC, Alien: Isolation takes place 15 years after Alien, the first film in the famous sci-fi series, and 42 years before heroine Ellen Ripley wakes up from stasis in the sequel, Aliens. Her daughter, Amanda Ripley, is working with the meg corporation Weyland-Yutani to find out the truth behind her mother’s disappearance. The aliens must love the Ripley bloodline, because it doesn’t take long for Amanda to meet one of the deadly creatures herself.

But it’s not the only enemy you’ll face in the survival-horror game. At a recent press event, developer The Creative Assembly introduced two new groups: other humans and rogue androids.

“We like to think of it as something like a food chain, with the alien very much at the top because it’s unkillable and it’s relentless,” said writer Will Porter to GamesBeat. “And it will learn if you’re using different tactics and techniques.” 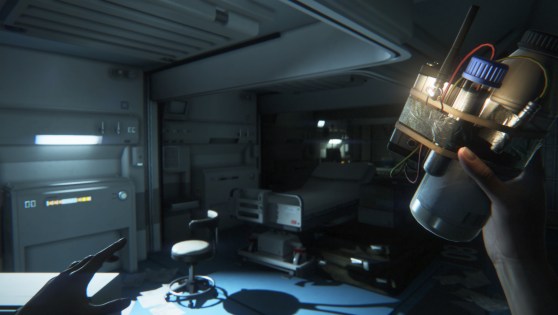 Above: The noisemaker is good for distracting the alien.

Sevastopol isn’t a very happy place by the time Amanda and her three-man crew arrive. The decommissioned trading station descended into chaos when supplies became scarce. Any sense of law and order disappeared — and this was before the xenomorph started picking them off.

The new demo began with Amanda entering Sevastopol’s hospital by herself, communicating with her colleagues via radio. This gave me some time to check out Isolation’s crafting system, where you can combine spare parts into Molotov cocktails, noisemakers, and other weapons. Looking for those parts made me realize just how antiquated everything is. The stark white walls, bulbous electronic panels, and giant computers remind you that this is a vision of the future filtered through a late ’70s lens — The Creatively Assembly’s attempt at maintaining cohesion with the first film (Alien came out in 1979).

When a gas pipe exploded, blocking my path with a wall of fire, the alien heard the noise and dropped down from the rafters. As soon as I saw its long, sharp tail, I bolted to a nearby locker to hide in. It was terrifying: The only thing you can do is stare at the moving white dot on your motion tracker, its high-pitched alert beeping faster and faster the closer the alien gets. When the xenomorph walked into the room, it peered into my locker, and a button prompt popped up to let me know that it’s a good idea to hold my breath here.

I was happy to oblige.

A few perilous seconds passed before the alien moved on. I didn’t leave the locker until the tracker was quiet again.

If the alien knows you’re inside, it’ll pull you out and kill you in a number of gruesome ways, like when its inner mouth burrows into your forehead. 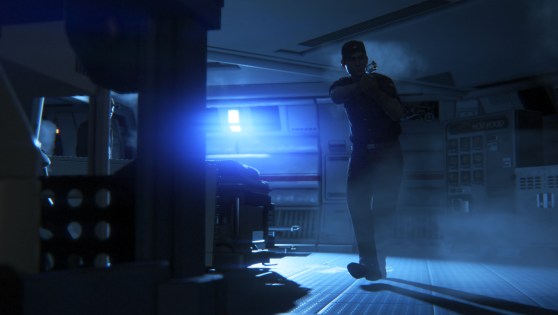 Above: Think twice before approaching other survivors.

A couple of rooms and eviscerated corpses later, I found the medical ward, where I saw the human survivors for the first time. I guess they weren’t worried about the xenomorph, because I could hear their conversations from a mile away. Their presence disrupted my seach-and-loot philosophy: Should I sneak around them, hoping they don’t notice? Or should I take them down silently, so I can explore freely again?

In my first attempt, the alien actually took care of them for me. It probably heard my footsteps, because it appeared a few seconds after I passed through the medical ward’s sliding doors. I hid behind a bunch of boxes at the time, so it didn’t spot me, but it did hear the humans at the end of the hall and ran after them. I was going to investigate, but the screams convinced me to head the other way.

When I had to repeat this sequence (the alien killed me in an unrelated incident), I wanted to try something new. Thinking I could talk to them, I headed straight for a guy who was patrolling the area, but he immediately pulled his gun, urging me to leave. I actually got a little angry, and even insulted, that with all the other crap going on, this guy thinks I’m the biggest threat in the hospital. Didn’t he see the 9-foot monster that’s hunting us down here?

I didn’t feel like dying, so I turned around. He told me that I was doing “the smart thing.”

According to Porter, not everyone in Sevastopol are that hostile. He described the population as being a mix of friendlies, neutrals, and people with “slightly longer fuses.”