Four first-person shooters and they all have different features, control schemes, maps, playlists, weapons, and so on and so on. And Microsoft Studios wants to update them all and mash them up into a single do-everything disc? Good luck with that. (Seriously — because I plan on playing this one a lot.)

Halo: The Master Chief Collection is a compilation of all the games in the Halo series that the titular Spartan warrior has appeared in. It’s an all-in-one disc, coming out for the Xbox One on November 11, but it’s a little confusing to dissect. What features are we getting exactly? How will the various tweaks over the years affect older products? What’s the difference between Halo 2 and Halo 2 Anniversary (they’re kind of separate products here)? I had a little trouble understanding how this was all going to work, so I talked to three different sources at developer 343 Industries to get detailed clarifications. 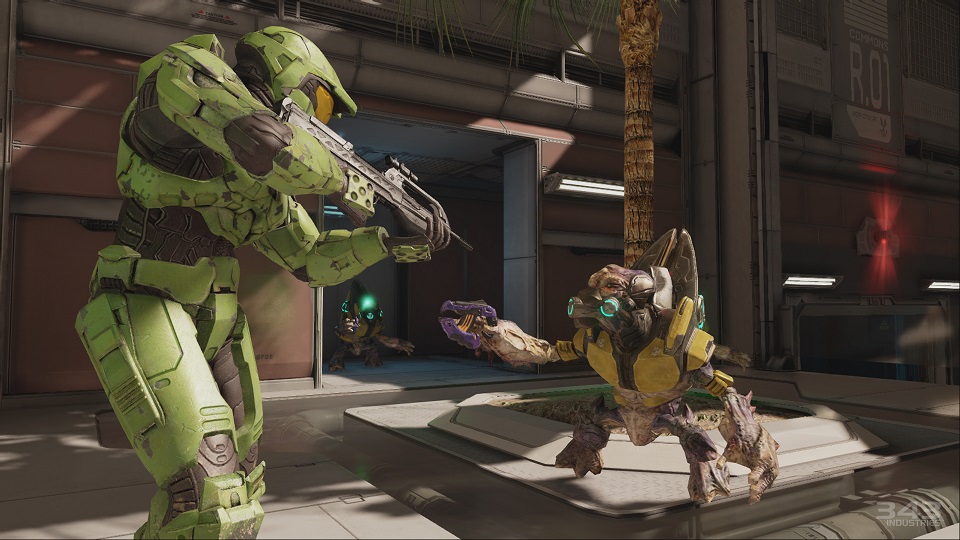 What comes in the box?

All associated downloadable content will be included as well. That means all maps ever released — including for the PC versions of Halo — will be included. “That’s well north of 100 maps,” 343 executive producer Dan Ayoub told GamesBeat. “If it was released in any form, it’ll be in here.”

What won’t come in the box?

Anything named “Halo” that wasn’t listed above, including the games Halo: Reach and Halo 3: ODST. Only the games that Master Chief has starred in will be in this collection.

How will the games look on the Xbox One?

343 updated the first four Halo games to receive some showy lighting effects and to run at 60 frames per second (that means everything moves about twice as smooth) and 1080p (crisp, high resolution) on the Xbox One.

Halo: Combat Evolved is based on its Anniversary Edition, which we saw released on the Xbox 360 in 2011. This means this oldie won’t just receive the simple lighting, frame-rate, and uprez treatment (like Halo 3 and Halo 4 are getting). The developers already overhauled the graphics and remastered the sound to modernize the game more thoroughly three years ago, and it’ll get the additional 60 fps and 1080p upgrade for the Xbox One.

Halo 2 is also getting an Anniversary-style facelift — totally redrawn visuals plus the 60 fps and 1080p stuff. But the slightly confusing part: Only six of the Halo 2 multiplayer maps will receive the same treatment, and these are on the disc alongside the full Halo 2 catalog. That means you can select Halo 2 multiplayer to get access to all its original maps in 60 fps and 1080p, or you can select Halo 2 Anniversary Edition multiplayer to get access to six special levels that are 60 fps and 1080p and also revamped and redrawn from the ground up.

Ayoub did hint at additional tweaks to these Halo 2 Anniversary maps, but Microsoft is saving details for the Gamescom conference in August. The good news for fans: Max Hoberman, the original multiplayer designer on Halo 2, came back to help redesign these classic levels.

Both Halo: CE and 2 Anniversary Editions offer “classic mode” in their campaigns. Players can press a button at any point during live gameplay to transform what’s on the screen into its original Xbox form — ugly and blurry by today’s standards (but at 60 fps). This is useful for when you need to tell spoiled young gamers, “See how good you have it now?” 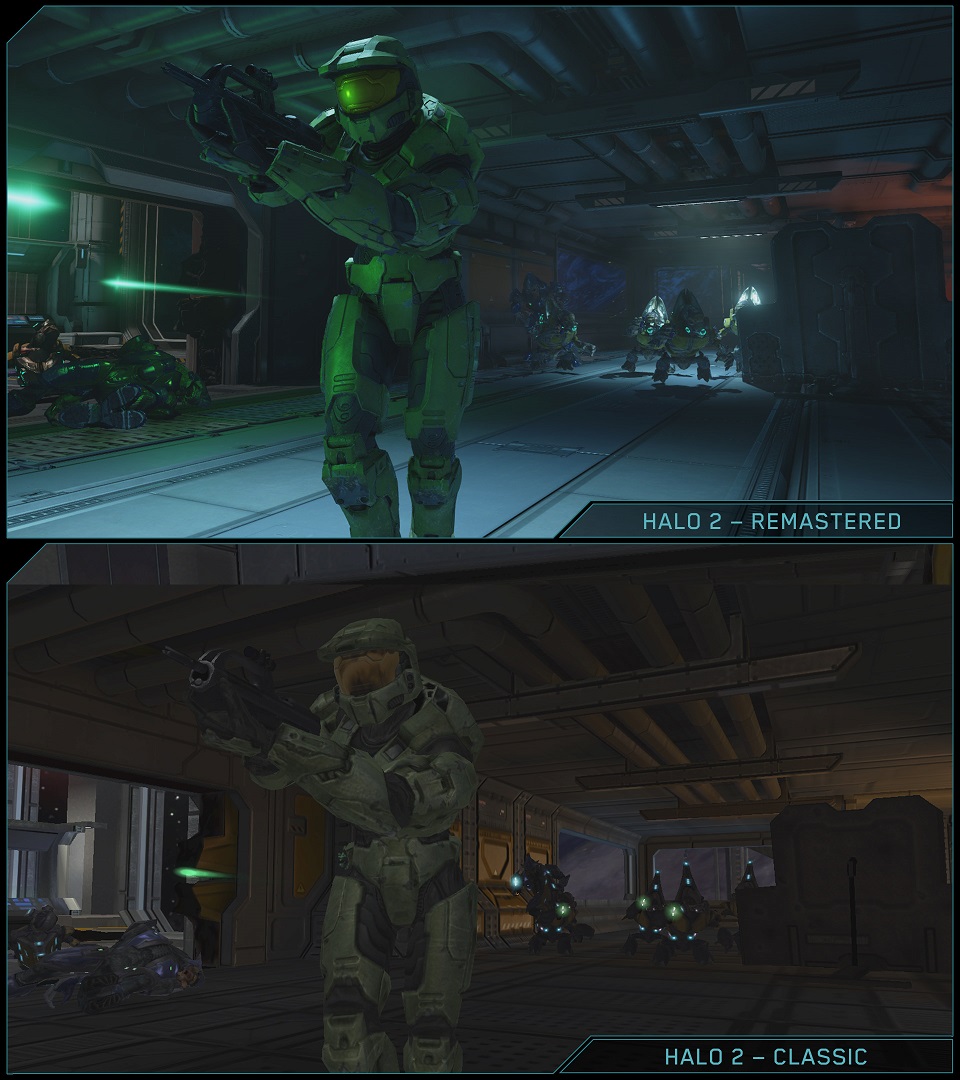 Above: The original Halo 2 from Xbox vs. Halo 2 Anniversary on Xbox One. See below for many more comparison shots.

How else have the games changed for Xbox One?

Microsoft and 343 have been very clear on the messaging here: If it was in the original, it will be in its equivalent inside The Master Chief Collection. That means, besides the visual improvements (and playing on an Xbox One controller, of course), you will be experiencing each individual title as you would expect. No story changes. No gameplay tweaks. No new modes added. No old modes taken out. And all unlockables will stay in their respective editions. “It’s about the purity of the experience,” said Ayoub. “You can play Halo exactly like you did before.”

How will all the campaigns work and fit together?

Players can, however, go straight into any chapter within any campaign — they’re all unlocked and accessible from the start. (343 assumes you probably played these space adventures before and might just want to jump to your favorite bits instead of completing everything in order.) All old gameplay/score-modifying Skulls are still available as well and unlocked right from the start.

The developers know that some fans will still try playing through all four campaigns in a row, for a crazy Halo marathon. They plan on rewarding such 50-hour antics with a special Achievement award.

When players start on the campaign side of this disc, a new prologue cinematic will welcome them. It helps tie everything Halo together, including hints at Halo 5. A new epilogue will be on this disc as well, but 343 is still working out how players will access it (since all the chapters are available, and no one has to play them in order).

Co-op play is still available for all four games and will all be online (including Combat Evolved). 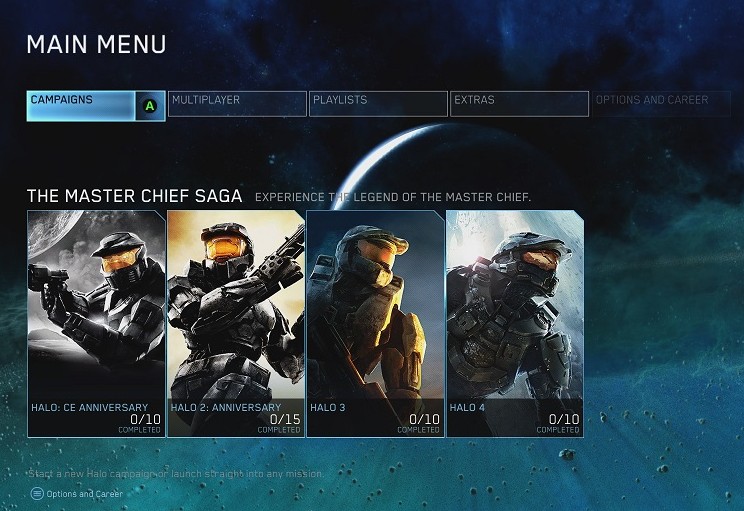 Above: As you move your cursor around the Halo-select screen, the music will change to match the current choice, so you hear the originals’ tunes.

The Master Chief Collection will have 4,000 Gamerscore worth of Achievements to unlock. Some of those are new and will reward cross-Halo play (like the above “play all campaigns” example or ones that encourage people to try out all four games’ multiplayer).

How will multiplayer work and fit together?

First of all, this collection won’t feature any sort of master mashup where all maps’ different features or weapons will cross over into a game they were never part of. So you won’t see Halo 2’s dual-weapon wielding in Combat Evolved, for example. Halo 4’s sprint and armor abilities won’t make an appearance in Halo 3. Your favorite variation of the pistol will stay in its respective edition.

“We tried it,” said Ayoub of making a universal Halo multiplayer that incorporates all elements of all four games. “The math got bad.” In other words, it just wasn’t balanced.

You can select which Halo you want to play in multiplayer, if you just want to stick to one game. This includes the fifth Halo 2 Anniversary Edition option (which is separate from just “normal” Halo 2, remember). This also includes a proper online Combat Evolved. The previously released Anniversary edition contained multiplayer, but the gameplay all came from Halo: Reach. Now you can play Combat Evolved in its original form on Xbox Live for the first time.

But who wants to play just one Halo? 343 suspects you’re not that lame and will be pushing for players to cross-play via mixed playlists.

A “Capture the Flag” hopper, for example, can span several Halos. So if you select that playlist, you’ll get variations of that mode and play them on maps from Halo: CE through Halo 4. You won’t get any specific filters, however, so if you wanted to tune out just Halo 3 for some odd reason, you won’t be able to do that on the public matchmaking rooms. While voting on which map they want to play next, players waiting in the lobby can see an icon indicating which Halo that stage came from.

343’s challenge here is in deciding what playlists will be worth showcasing. Most Halo fans will have their own ideas about what’s worth listing, so keeping all of them happy while making sure matches are properly populated (and with similarly skilled players) will be tough.

The studio really wants to encourage cross-Halo play, however, so expect most of the public playlists to reflect that. It will even offer one gigantic “play everything” hopper that will just cycle through all available options across all Halos.

Microsoft plans to reveal more about how all this will work at Gamescom.

343 has a lot of fun ideas planned for both campaign and multiplayer playlists. For example, “Vehicle Playground” will cycle players through the multiplayer maps that are loaded with Warthogs, Ghosts, Wraiths, and other armed modes of transportation.

On the campaign side, we saw a few playlists such as “Final Four” (play just the final chapters of all the four Halos), “Hogs” (play the levels that feature the Warthog jeep), and “Flood” (play the stages featuring the parasitic creatures).

How will matchmaking and rankings work across four different games?

Players will have a single ranking that spans across Halo 1-4 for matchmaking and showing-off purposes.

Will controls change from Halo to Halo?

Yes — unless you opt for one of the universal controller schemes that The Master Chief Collection will offer. You can just pick one setup and use that for any Halo that you jump into, so you won’t have to worry about buttons that change from game to game.

We have confirmed, though, that Halo 3’s specific controls will not be available as a universal controller option. Its left hand/right hand setup just doesn’t play well with the other Halos.

Forge will return in Halo 3 and 4, but the developers have also included the user-friendly level creator for use with Halo 2’s six Anniversary maps. So players will be able to modify those classic multiplayer stages and create custom game types.

What about the terminals?

Players can find new terminals sprinkled throughout Halo 2 Anniversary’s campaign. These will unlock short story-driven cinematics that flesh out the Halo universe. Luckily, 343 is making these easier to find than they’ve been in the past (and they were really tough to find before). The developers actually want you to see all the cool videos that they worked on.

The terminals in the non-Halo 2 games will stay in place, as they were.

What about Halo Waypoint?

The central hub for Halo players, their online profiles and progress, and extra content will still be around in some form, but 343 is working out the details. It plans on announcing more in the future, but it definitely wants everyone to have access to an abundance of stats.

What about owners of previous versions of the included games?

As expected, Xbox One players will not be able to go online to play against their Xbox 360 counterparts, so you won’t see any cross-platform competition here. But Microsoft is discussing if it can offer discounts for owners of the old games. Our guess? It won’t happen. Microsoft knows that the Master Chief Collection has a lot of content in it, justifying its $60 price tag.