As the new head of Microsoft’s game business, Phil Spencer gave his first command performance on the big stage at the Electronic Entertainment Expo (E3) video game trade show. Having learned a lesson from a year ago, Spencer said his focus will be on delivering great games, rather than touting celebrity endorsements for the Xbox One game console or its non-game entertainment features. He also said he was going to listen to feedback from gamers and take it into account.

Spencer and his team spent an hour convincing us that Microsoft has the line-up to succeed in the long war with Sony, rather than just the short-term street battle. Microsoft has nine exclusive games coming to the Xbox One in 2014, including Halo: The Master Chief Collection; Sunset Overdrive; Forza Horizon 2;
Ori and the Blind Forest; Dance Central Spotlight; Disney’s Fantasia: Music Evolved; Project Spark; Killer Instinct: Season 2; and Fable Legends (multiplayer beta). 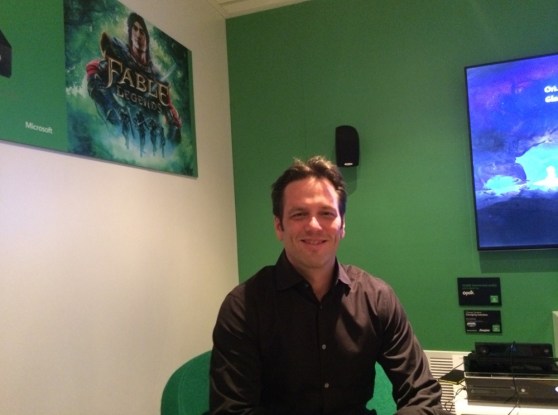 Those games look good, but so do arch rival Sony’s. And Sony has a lead in next-generation console sales, as it has sold more than 7 million units of the PlayStation 4 through the first quarter while Microsoft has shipped 5 million to retailers. Microsoft is investing heavily in its platform and game studios to make a difference, but Sony still has advantages, as it is selling a $400 box against Microsoft’s full-Kinect version of the Xbox One at $500 and a Kinect-less version at $400.

We talked about these matters in a wide-ranging interview on Tuesday. Here’s an edited transcript of our conversation.

GamesBeat: What do you think of the battle of the press conferences?

Phil Spencer: I think everybody had a good one. I watched Sony last night over in our hotel. We got a team together. A lot of years I actually go to the Sony one. We watched what Nintendo did. I thought Nintendo’s was funny. The tone they took was good. It’s a good year to be a gamer. All the console manufacturers showed up. Sony and Nintendo I thought had good conferences. What did you think?

GamesBeat: There are good games. I’m always sad about the ones that slip into 2015 or beyond. It’s the way of the business, I guess.

Spencer: We opened ours with an hour of all content you’re going to play on Xbox One in 2014. I wanted to make sure that we were deliberate in talking to the consumer, the gamer—If you own an Xbox One or you’re looking to buy an Xbox One, this is what you’ll get to play this year. Now that everything’s out there, I’d say that Destiny’s coming. GTA’s coming. You have Sunset Overdrive, Halo, Forza, Battlefield, Call of Duty. It’s a good lineup of games you’ll be able to play on Xbox One this fall.

GamesBeat: The investment in new IP–

GamesBeat: Yeah. Is that one you would consider to be in that category?

Spencer: It is from an investment standpoint, absolutely. Insomniac is a triple-A developer. I think about Sunset Overdrive, Quantum Break, bringing back Crackdown. It’s not like Crackdown is something we annualized. So either what I’ll call dormant IP or brand-new IP—As a first party, it’s an important part of what we do. But it’s not without risk. It’s probably the biggest risk, biggest return in the industry, if you get it right. But that’s true in any entertainment business.

GamesBeat: Now that you’ve been steering things for a while, do you foresee some changes in the the balance of different things? New IP versus servicing franchises, bringing in third parties, and so on?

Spencer: I just want the best games that are out there to be playable on our box. That’s going to be a mix of things that the third parties are building, and then we either go off and make sure they’re coming to Xbox, or we do some marketing deals or DLC deals to make sure they’re special on our box.

Looking at the content that we as a first party will bring, if you like a smaller game, a smaller indie-style project, very pretty, a different style of gameplay over a lot of the big mega-franchises, we’ll go support those. Things like Phantom Dust, bringing a game that people haven’t seen in more than 10 years. But also things like Halo, Sunset Overdrive, Forza. Any change, really, is going to be more about looking at the whole content portfolio and making sure our game portfolio is strong every year.

GamesBeat: Sony said they had 25 free-to-play games coming. What are your feelings about free-to-play?

Spencer: We have free-to-play games on Xbox 360 right now. Some of them are doing well. It’s like any game genre. It’s a hit-driven business. Things will come over. We’ve been invested in Happy Wars a long time. We have Warface and World of Tanks on the platform. The only thing about free-to-play as it comes to a next-gen console is just about when the installed base gets large enough that the games make money.

GamesBeat: Because maybe two percent of players actually buy something.

Spencer: Right. That’s the model. It’s a successful model, especially on scale platforms like PC and mobile. It’s working for us on 360. We’re seeing games that are successful. We’ve been in discussions with developers on Xbox One about when games are going to come. We’ve talked about Happy Wars and stuff. But you want the installed base of people playing to be large enough that there’s a viable business for those guys. I want developers and publishers to be successful on the box.

GamesBeat: Do you have some opportunities for some of the bigger games like Project Spark or Dance Central Spotlight as possible free-to-play games?

Spencer: I look at free-to-play as almost a creative tool. I know that sounds crass to some people, because it’s obviously a way of monetizing a game. But the engagement mechanic in free-to-play games is just different than a retail-driven game. Retail-driven games assume you buy the game up front and it delivers all this content. Free-to-play gives you this small compulsion loop where adding a consumption, usually on top of that compulsion loop, will lead to fun.

You have to think about it from the beginning of the creation of a game, whether you’re trying to create a free-to-play compulsion model or a retail model. At launch, I got a lot of questions about how Killer Instinct is a free-to-play game. No, technically, from a design standpoint, Killer Instinct wasn’t free-to-play. It was more of a trial where you can buy the additional content. There was nothing consumptive about it. You own the characters once you buy them. You’d eventually buy them all. Free-to-play games never have this notion that you’ve eventually bought all the content, because that doesn’t make sense in a free-to-play game. They’ll always have something you can keep buying.

Games like Spark and some others, they’d have to start with what they’re going to be. What is the business model behind the game from the beginning? Spark isn’t a free-to-play game in the traditional sense.

GamesBeat: You have the opportunity for something interesting as far as the model goes.

Spencer: We could. For me, Spark is just a really interesting tool to get people creating. We’ve seen more than a million people create things on the platform, which I love. Now we’re starting to bring content from some of our older franchises into the Spark world. We announced Conker, so that people who want to go re-create their Conker memories in Spark can go do that. I know certain people want us to go do a brand-new Conker game. It doesn’t preclude us from doing that. It doesn’t mean we are doing that. This is just an opportunity, with something like Spark, to give tools to the community so they can go build and play.