I know, I know, another Bitcoin startup story. But wait; this one is different.

A San Francisco-based startup called QuickCoin is getting some attention for creating a simple way to send Bitcoins to people on Facebook. That’s a new spin.

I watched as the company’s chief technology officer, William Cotton, sent a few Bitcoins to my Facebook page, and it took him about three clicks, using the QuickCoin browser-based app. On closer inspection, the app was cleanly designed, and the navigation made sense to me. 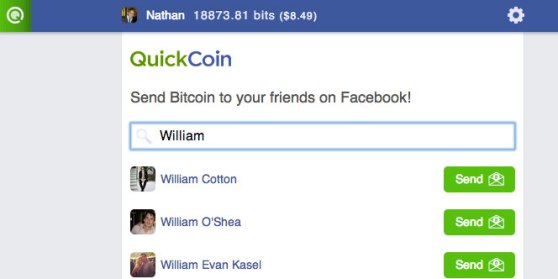 Lots of people are just now coming to understand Bitcoin, a decentralized virtual currency that is traded online. Part of the confusion around the currency has been the super-geeky feel of it, and the odd and clunky interfaces of Bitcoin sites. 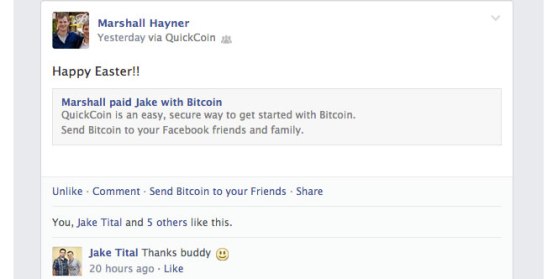 Of course, the problem with Bitcoin is finding things to buy with it. That has slowly begun to change, with some merchants now accepting the currency. You can now donate to political campaigns with Bitcoins. Bloomberg will start listing Bitcoin prices for its more than 320,000 professional service subscribers, the company announced in late April.

QuickCoin happened very quickly. It was founded by Marshall Hayner and Nathan Lands in early April. After seven weeks of furious coding the company launched its product on May 20.

Along the way, QuickCoin picked up Cotton and brought on Vimeo cofounder Zach Klein and DogeCoin cofounder Jackson Palmer.

The company took a “do first, ask forgiveness later” approach to integrating with Facebook. But rumor has it that the social networking giant is OK with the idea of Bitcoin transfers on its site.