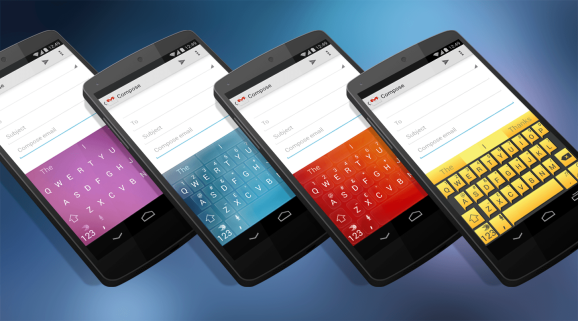 SwiftKey announced today that it is dropping the $3.99 cost of its keyboard app — one of the few truly successful paid Android apps — and adding a new array of free and premium keyboard themes.

While it’s a surprising move for SwiftKey, it’s one that could help it grow beyond the 200 million devices it’s currently used on. After Apple’s surprising announcement last week that it’s supporting third-party keyboards in iOS 8, SwiftKey also announced that it’s already working on an iOS 8 keyboard.

“It’s less about banking on micro-payments — it’s broader than that, it’s about trying to build momentum behind a product,” SwiftKey chief marketing officer Joe Braidwood told VentureBeat in an interview. “It’s part of the idea that technology should adapt to you … core to that vision is having as many people using that technology as possible.”

[We’ll be exploring how companies can grow their mobile business quickly like SwiftKey at MobileBeat 2014 in San Francisco on July 8-9. Grab your tickets now!]

The new SwiftKey keyboard includes all of the features its users are accustomed too: personalized predictive typing, the ability to swipe between letters to spell out words, and cloud backup for your SwiftKey usage history (which lets you bring your typing habits to multiple Android devices). But now you’ve also got access to the SwiftKey Store, which includes 30 new keyboard themes, and a number row.

SwiftKey is also offering a free theme pack worth $4.99 to people who’ve already paid for its previous apps. While recent SwiftKey buyers may feel a bit burned, I can’t imagine too many of its paid customers will complain. Thanks to its powerful predictive typing engine, SwiftKey has gathered a loyal fan base (it’s one of the first things I add to every Android device I test).

“In the grand scale, it’s about being more than just a keyboard,” Braidwood said. “We’ve got some great ideas for what a world with hundreds of millions of users using SwiftKey would be like, it’s certainly a much more exciting project [than] simply relying on a paid app to sell itself.”

SwiftKey is also rethinking how it partners with other companies now. Previously, SwiftKey licensed its SDK to partners to integrate into their own phones. But now it plans to offer the full SwiftKey app to partners, allowing phone owners to see what exactly is powering their keyboard. Braidwood also hints that there will be a few ways to sweeten partnerships, including revenue sharing and exclusive content.

With more than $20 million in funding, a healthy user base, and a strong brand, SwiftKey seems ripe for an acquisition some point soon. “In terms of final exits, we’re trying to build a sustainable business,” Braidwood said. “That’s all that really matters. Who’s to say what the outcome of that looks like.”