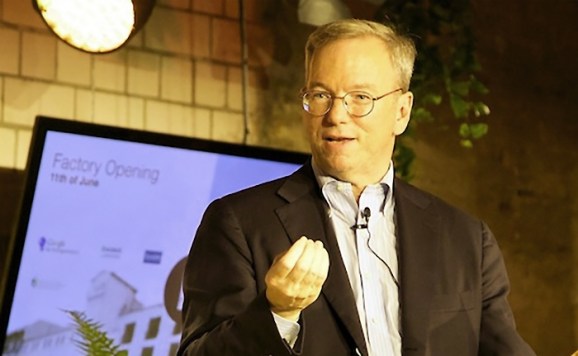 After two years of construction, the eagerly anticipated Factory held its grand opening yesterday. The startup campus will welcome 22 companies, including SoundCloud, Twitter, and 6Wunderkinder, to its 16.000 m2 space. The full-day event was kicked-off by Mayor of Berlin Klaus Wowereit along with the Factory Founders Simon Schäfer and Udo Schloemer. The evening’s official Opening Ceremony brought in the crowds with Eric Schmidt, Executive Chairman of Google, as the keynote speaker.

“When I think of this location, I feel that it is perfect for the renaissance to come,” says Schmidt on the Factory. In his keynote, Schmidt spoke on the rapid transformation of Berlin through its difficulties to becoming what is now for him a unique, vibrant, and global cultural center. With this environment as a springboard, the “renaissance to come” is the shift towards becoming a more entrepreneurial society.

“We need entrepreneurs,” says Schmidt. “We need to recognize the role they play.” His worry is that the economic growth we have experienced will not continue unless we support entrepreneurs. Pointing to the high rates youth of unemployment in Europe, Schmidt noted that for every high tech job created, four non-tech jobs are created. Along with more better paying jobs, Schmidt called for Germany to improve its internet infrastructure and to begin designing education to encourage entrepreneurship and teach technical skills.

His message to entrepreneurs was to take a more global perspective. “Europe is beginning to get it,” he says. Schmidt used SoundCloud as an example of a fast growth startup that thinks globally.

SoundCloud Founder Alex Ljung also took to the stage during the opening ceremony to express his excitement in joining the Factory community. “In the way that we felt like Berlin was home, I feel like that we as SoundCloud are now coming home. I really hope that all of you feel a connection to the Berlin creative startup scene.”

Still curious? Check out our pictures from the event including a first look at SoundCloud’s new office.