LOS ANGELES — Richard Garriott, the legendary creator of role-playing games like the landmark Ultima franchise, scored big with Shroud of the Avatar’s Kickstarter campaign in April 2013. Garriott, also known as Lord British, raised $1.9 million via his Portalarium startup, and he was able to recruit longtime developer Starr Long to help run the game.

Now they just have to finish it.

Another role-playing game, Shroud of the Avatar is the “spiritual successor” to Garriott’s Ultima series, which Electronic Arts owns. Garriott and Long said they love the freedom that they get in making their own creative decisions. But they also said they are getting lots of feedback from thousands of fans, and they are now reporting their progress as transparently as possible.They have released playable, prealpha-test versions of the game and are targeting a full release by the fall.

The fan feedback is critical, and they want transparency. But Garriott doesn’t mind. He once had to do elaborate, detailed progress reports when he was at EA working on the Ultima series.

We caught up with Garriott and Long at the giant Electronic Entertainment Expo tradeshow in Los Angeles. Here’s an edited transcript of our interview.

Starr Long: This is release six, from a few weeks ago, which we’ve re-opened for E3 so our backers could play it and we could show it off here. We’ve been doing monthly releases for about six months, almost seven months now. The third week of every month. It’s pre-alpha. All our backers get access for three to five days at a time. That’s part of the reward you get as part of your pledges. Each release is an iterative addition to content, whether it’s new maps or A.I. or monsters or expansions in the crafting and combat systems.

Richard Garriott: In addition to being crowdfunded, we’re doing a lot of crowdsourcing of materials. We’re doing our development very much in the open. We publish our daily meeting notes for everyone. Everyone knows what’s happening on a daily basis. They know where their money is going. They know every single person on the team, and every person on the team is working on it every day.

They get weekly updates, and then they get to play every month. We started letting people in when it was literally just an Avatar walking on the dirt. Every month they get to see the world unfold before them. We’re finally in a place now where we have a real game. It’s by no means complete. We have plenty of bugs. It’s still in a pre-alpha state.

GamesBeat: What can players do? What sort of activities?

Long: They can craft. We have smithing, so they can make weapons and armor. We have carpentry and tailoring, making clothes and leather armor, making furniture and ranged weapons and polearms. Then there’s combat. There are creatures to fight. There’s housing, so players can place houses and decorate them. A lot of those decorations can be made through the crafting system.

Garriott: Player towns have already begun to pop up. There’s a place called PaxLair, which was the first town in any online game. It was built in the beta of Ultima Online and it still exists to this day. PaxLair is already now in Shroud of the Avatar. They’ll have a continuity to the first virtual city in the history of gaming. It’s the same people building their same general floor plans.

We consider this a spiritual successor to Ultima. It’s New Britannia instead of Britannia. They feel, and we agree, that there’s a continuity of purpose here.

GamesBeat: Communication sounds like a pretty big job for you guys. Do you have dedicated people for that?

Long: We’re a small team. We’re only 30 people. Everyone wears multiple hats. While Dallas does the bulk of the work to get the writing and the actual updates, we all participate in creating content for the game with our players. Whatever amount of overhead is associated with that, whatever amount of time, it’s a tiny fraction of the amount of time I would have normally spent doing Powerpoint decks at a big company.

Garriott: Which are usually much more vast and much less widely read. We think it’s less for greater quality, as far as the touch that it has on the people who care.

Long: When our backers tell us something sucks, we trust them way more than we would have trusted an executive or the sales department. 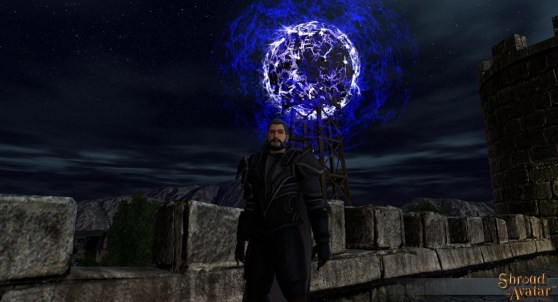 Above: Shroud of the Avatar in action.

GamesBeat: Do you have any good examples of changes that come from this process?

Long: Every release, we allocate at least 30 percent of our time to responding to feedback from the previous release. One of the big first changes—originally, mainly out of time and budget constraints, we were only going to allow running and walking. We weren’t going to have jumping or swimming. Like in Guild Wars one or Final Fantasy XI. When players got in, they hated that.

Garriott: “This is not Ultima.”

Another example, the world is divided up into scenes. We have a dual scale. When you leave a scene, you go to a sort of JRPG-style overworld map. In the Kickstarter we showed it as a 3D render, like in Civ V, that kind of style. Your character is slightly enlarged. We started going down a path that created some challenges as far as getting it to look right and having movement feel right.

Right before we did one of our releases, we decided to do an experiment. “Let’s make it look more like a cloth map.” Because of course Ultima is known for those cloth maps. We launched it with that and the players revolted. They said, “One, this isn’t what you showed us in the Kickstarter. Two, it breaks the immersion to go from a very detailed world to this very stylized view.” We said, “You know what? We’ll do it the other way and go back to 3D.”

Garriott: The nice thing about developing in the open as much as we are is, in the worst case we’re a month into it before we get this feedback. Compare that to most games, where you’re already in the beta, if not final, before you get any real player feedback. A lot of times you’ll spend months or years on developing something that isn’t quite right. In our case, we can turn and make those corrections very early in the process, because the process is open to all of our users.

Garriott: By far. Not just because the team is more efficient from that standpoint, but there are other reasons too. One is Unity. I’m a huge fan of Unity. It’s a game-changer for us and for the industry. This is the wave of the future, instead of redesigning engines from scratch over and over.

Having Unity means we probably save about 50 percent of our total development time, and at the same time, since we’ve been able to do things like the crowd-sourcing of assets, we’ve been able to cut the team size by about half. In total, it saves us three-fourths of our money. We can do it in half the time with half the team for a quarter of the budget. It’s profoundly better. With a team of only 30, one of the best things about that is we’re actually doing real, in-the-trenches work again, as opposed to just being the managers of managers. We’ve had a much more direct, hands-on impact on this game than any game either of us have done in the last decade and a half. 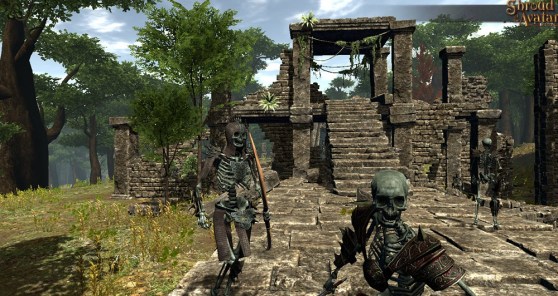 Above: Shroud of the Avatar

Long: The last time you wrote a story was, what, Ultima VII?

Garriott: Ultima VII, yeah. That was the last time I was writing the story personally in detail. I’m doing that again. I’ve already drafted it three times. I’m on the third pass of poring through the whole thing from top to bottom to get it tighter and more complete. Then we’ll have a wordsmith make it work in the game.

Long: I’ve been just signing off on things for the last 15 years or so. This is the first time that I’ve gotten to go back and—I got to design all our skill trees. I was sending emails to him – “Hey, I’m designing the magic skills. I need to know what reagents you want to use.”

Garriott: Then the same day I was like, “All right! Reagents again!” I signed on to do reagents. I even designed where they would be found, under what circumstances, how they’d be harvested, which spells they’d be part of. I handed it back to him and he worked it all into the skill stuff. It’s the way it was, and we’re very happy it’s that way again.

GamesBeat: Do you have a target date for whatever comes next?

Long: We’re already live. We’ve been doing releases for almost seven months. We’ll continue to do that. We’ll always have that monthly release. I crack the whip and we always make those dates. We do have to push or pull some content. We give the players about a three-month window into what we’ll release over the coming months. Then, as each release comes out, we’ll say, “We didn’t make this piece, but we added that piece in.” But we always make the date.

Our goal is, around the end of the year we’ll stop deleting characters. We’ll be live. We may still be in beta at that point, but we’ll start enabling persistent progression and the persistent world.

Above: One of Shroud of the Avatar’s towns: Ardoris