NEW YORK — It’s been a while since Samsung made a big deal about its Galaxy tablets, but tonight it pulled out all the stops at Madison Square Garden.

Samsung tonight announced the Galaxy Tab S, a new line of Android tablets with 8.4-inch and and 10.5-inch screens.

With these latest slates, Samsung is putting the emphasis all on their Super AMOLED screens, which it claims offer brighter and more accurate colors than typical LCD screens. Samsung delivered one of the most color accurate mobile screens so far with the Galaxy S5, and it seems like the company brought the same emphasis to the new tablets. 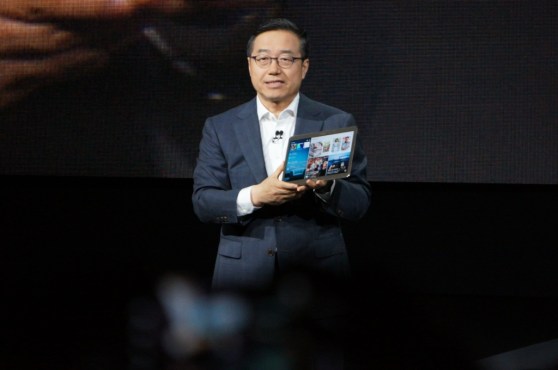 Above: DJ Lee, Samsung’s EVP and Head of Sales & Marketing, showing off the Galaxy Tab S.

The Tab S slates also look a lot like the Galaxy S5, with a similar plastic frame and faux-leather rear cover. Samsung didn’t say much about the tablet’s internal specs, which is yet another sign that we’ve reached a tipping point in mobile hardware.

In recent years Samsung has focused more on its Galaxy Note tablets, which sport a stylus that differentiates it from the iPad and other popular tablets. The Galaxy Tab series, meanwhile, has been quietly updated without much celebration. That all changed today.

Now, Samsung is positioning the Galaxy Tab S as its flagship tablet line. At just 6.6 millimeters thick, they’re the thinnest slates Samsung has ever created.

The Galaxy Tab S slates also have several screen features that make them stand out from the competition. An ambient sensor automatically adjusts white balance, which could be useful when reading e-books; a cinema mode optimizes the screen for fast movement; and an Adobe color accuracy mode, which could be ideal for photographers and artists.

If you’ve got a Samsung Galaxy phone, you can also receive calls directly on the Tab S using a new feature called SideSync. That also allows you to drag documents from the Tab S onto your Galaxy phone, and vice-versa. It’s somewhat reminiscent of the features Apple announced last week that integrate iOS and OSX.

The Tab S also sports a fingerprint sensor integrated into its home button, like the Galaxy S5. In addition to securing the tablet, you can also set up the sensor for up to eight family members to automatically log into their respective profiles.l

Marvel chief creative officer (and renowned comic book creator) Joe Quesada also hit the stage to announce a new partnership between Marvel and Samsung for the upcoming Avengers: Age of Ultron film. Samsung products will appear inside the film, and Galaxy users will get some exclusive content.

Like LG’s new G3 smartphone, Samsung is betting that consumers will notice that its screens look better than the competition. That’s a tough sell though — you’ll need to actually see a Tab S in person to get the full experience from its screen, a flashy commercial won’t be enough. And even then, I’d imagine most consumers wouldn’t see a dramatic difference.