The change in decor represents a bold, altruistic declaration from the electric car maker, which will permit anyone to use its electric-vehicle technology, patents be damned.

“Tesla will not initiate patent lawsuits against anyone who, in good faith, wants to use our technology,” Tesla CEO Elon Musk wrote in a statement today, citing the spirit of the open-source movement. 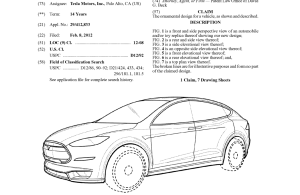 Above: A Tesla Motors patent.

“If we clear a path to the creation of compelling electric vehicles, but then lay intellectual property landmines behind us to inhibit others, we are acting in a manner contrary to that goal.”

Musk hopes the move will encourage large automakers to invest more heavily in electric vehicles, which still represent what he says is “far less than 1 percent of their vehicle sales.” Earlier in the company’s life, Tesla patented its technology to protect itself against larger competitors seeking to steal its technology and overwhelm the electric car startup — but that threat never materialized, said Musk.

The auto industry tends to safeguard its secrets — or license designs for pricey fees — so we have little precedent for an “open-source” mentality among carmakers. The most prominent example dates back to the early 1960s, when Volvo decided to give away the patent for its three-point seat belt to improve car safety.

While that move was humanitarian, Tesla stands to benefit financially from sharing its technology with other auto manufacturers (beyond improving its already stellar reputation among consumers). If some Tesla tech becomes a standard “platform” for future electric cars, that may prompt other companies to build products compatible with its vehicles — like new charging stations, which are essential to Tesla’s viability as a long-distance travel option.

Leaders in the technology industry are applauding Tesla’s stance.

“In a nutshell, I think that Elon has set a great example for the rest of the industry and everyone should follow,” Vivek Wadhwa, a fellow at Stanford University’s Rock Center for Corporate Governance, told VentureBeat.

“Patents have become a destructive force — they are line nuclear weapons and no one wins. In fast growing technologies such as software and hardware sensors — which form the basis of much of today’s tech revolution — the best defense is speed to market and rapid evolution. Patents cause companies to stay put and defend existing turf — they take away from innovation. They need to be abolished completely, but in the meantime, it is best for technology companies to declare a truce as Elon just did, and then disarm.”

What constitutes “good faith” use of Tesla patents remains unclear. If Toyota made a carbon copy of the Tesla Model S, for example, it’s unlikely Tesla would hesitate to initiate legal action. (VentureBeat has reached out to Tesla for clarification on this matter.)

But wherever Tesla draws the line, it’s far from the company’s official stance prior to today. We applaud the company’s action and hope it inspires similar openness among other innovative ventures.

“Technology leadership is not defined by patents, which history has repeatedly shown to be small protection indeed against a determined competitor, but rather by the ability of a company to attract and motivate the world’s most talented engineers,” wrote Musk. “We believe that applying the open source philosophy to our patents will strengthen rather than diminish Tesla’s position in this regard.”

Here is the announcement, in full.

All Our Patent Are Belong To You
By Elon Musk, CEO

Yesterday, there was a wall of Tesla patents in the lobby of our Palo Alto headquarters. That is no longer the case. They have been removed, in the spirit of the open source movement, for the advancement of electric vehicle technology.

Tesla Motors was created to accelerate the advent of sustainable transport. If we clear a path to the creation of compelling electric vehicles, but then lay intellectual property landmines behind us to inhibit others, we are acting in a manner contrary to that goal. Tesla will not initiate patent lawsuits against anyone who, in good faith, wants to use our technology.

When I started out with my first company, Zip2, I thought patents were a good thing and worked hard to obtain them. And maybe they were good long ago, but too often these days they serve merely to stifle progress, entrench the positions of giant corporations and enrich those in the legal profession, rather than the actual inventors. After Zip2, when I realized that receiving a patent really just meant that you bought a lottery ticket to a lawsuit, I avoided them whenever possible.

At Tesla, however, we felt compelled to create patents out of concern that the big car companies would copy our technology and then use their massive manufacturing, sales and marketing power to overwhelm Tesla. We couldn’t have been more wrong. The unfortunate reality is the opposite: electric car programs (or programs for any vehicle that doesn’t burn hydrocarbons) at the major manufacturers are small to non-existent, constituting an average of far less than 1% of their total vehicle sales.

At best, the large automakers are producing electric cars with limited range in limited volume. Some produce no zero emission cars at all.

Given that annual new vehicle production is approaching 100 million per year and the global fleet is approximately 2 billion cars, it is impossible for Tesla to build electric cars fast enough to address the carbon crisis. By the same token, it means the market is enormous. Our true competition is not the small trickle of non-Tesla electric cars being produced, but rather the enormous flood of gasoline cars pouring out of the world’s factories every day.

We believe that Tesla, other companies making electric cars, and the world would all benefit from a common, rapidly evolving technology platform.

Technology leadership is not defined by patents, which history has repeatedly shown to be small protection indeed against a determined competitor, but rather by the ability of a company to attract and motivate the world’s most talented engineers. We believe that applying the open source philosophy to our patents will strengthen rather than diminish Tesla’s position in this regard.