In simpler terms: Social discovery is an Internet company’s attempt at suggesting you things you don’t but should know, based on various factors including other people’s tastes and algorithms.

After chatting with a few different people in the space and even attending the event in San Francisco, two things became clear: As with everything, mobile is the next frontier, and location is the “it” factor. Second, people don’t want to meet new people — unless it’s to “date” them (for varying definitions of the term “date”).

Location because of mobile

“Mobile changes everything. We have a device on us, it’s much more of personal,” said Tagged cofounder and chief executive Greg Tseng in an interview with VentureBeat. “And I think that mobile makes the social discovery opportunity even bigger.”

Unlike desktops and even laptops, which people often share, phones are usually a one-to-one ratio. Each people has their own, it’s personalize to their taste, it’s almost always with them, and so on.

In the case of shopping, mobile devices not only mean a whole different user interface and experience, but also a new realm of possibilities — location being a very important one.

“Yes, we are an online site, and previously you had your wireless laptop, and that’s how you shopped. Now you have your phone,” said Zappos head of Mobile Aki Iida to VentureBeat in an interview. Zappos has both a mobile site and a mobile app.

“Now you have customers going anywhere and accessing Zappos anytime. Previously, we knew that people were sitting at a desk and looking at things. Now people are on the move, and while they’re out there, things may inspire them to shop for a product,” he added.

While Apple’s iBeacon is not something that would be of much use to Zappos as it doesn’t have brick-and-mortar stores, the idea that location gives clues as to what a Zappos customer could be thinking about purchasing is very real.

Tagged, a social discovery network, is also in the process of leveraging mobile and its ability to add location to equation. The company is currently revamping its mobile app, as half of it traffic happens on mobile. Mobile also means it can leverage features such as “Meet people nearby,” adding even more likelihood of a connection between folks on the network.

Along with gamifying the profile browsing process and a very focused way of evaluating profiles (read: based on their picture), Tinder also capitalizes on location, feeding people a stream of potential matches that are reasonably nearby.

This is important. The idea of getting matched and striking up a conversation with someone in a different city, state, country, or even continent is not appealing when seeking romantic matches. It eliminates the core aspect of a romantic relationship, which is the in-person hangout.

Alex Capecelatro and his team built At the Pool, a social networking and discovery app created specifically around the idea that people would want to connect with folks that are nearby, either because of mutual interests or because of an event or activity happening close by. Again, people nearby that you could potentially meet up with easily and continue vibing with.

Ironically, Capecelatro and his team are now leaving At the Pool behind (though taking its content and data with them) and will soon release a new app called Yeti. More about Yeti in a bit.

This is probably the topic where there is most disagreement.

If you ask people like Tseng, he will tell you that while helping people connect with others and make friends is difficult, it’s not impossible. It just requires a good recipe of interest-based engagement plus a few more ingredients, and voila — people making friend connections. Tseng’s company, Tagged, launched around the same time as Facebook and spent the first three years competing with it to become the social network of choice. Then in 2007, it decided to go into social discovery and help people connect with others, mostly through common interests.

And then there’s Capecelatro’s camp.

“Making friends is not only a challenge, I just don’t think it works online… It’s not natural, it’s not what we do in our everyday life,” he said in a phone conversation with VentureBeat.

Even Tseng has conceded that “Not that many people wake up in the morning and say ‘I want a new friend.’ This need to make new friends and meet new people is a much more subconscious thing… You can’t pitch an app: ‘Here’s a friend search app.’”

Capecelatro’s app, At the Pool, sought to build a way for people to gather around local events and happenings and to hopefully make friends and connections in the process. After all, aren’t common interests, in this case events and other topics, supposed to get people to interact and eventually make new friends?

“What we realized is that none of that mattered. What they were using the app for was to post content,” not meet new people, said Capecelatro.

The only exception, according to Capecelatro, is meeting new people to date (or whatever). That works great — see case of Tinder.

Capecelatro’s new app, Yeti, is all about the information people were sharing on At the Pool, both location-specific (local restaurants, events, etc.) as well as location-agnostic (movies, music, and so on). The app also has a similar “swiping of cards” interface, much like Tinder’s. 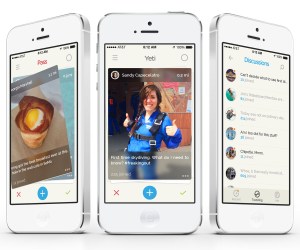 His belief is that while people aren’t looking to make new friends through apps; they are looking for new content (e.g. Reddit) and information about local happenings (e.g. Yelp, Twitter). If personal connections, online or in person, do result, then that’s great. However, it’s not what people are looking for.

Tseng also admitted that connecting people with friends is a more indirect process. He thinks of social discovery of other people as a party: You can go to a party, maybe even a couple of friends, and either hang out with your own friends, make new ones, or none of the above. This is of course the direction he wants to take Tagged into.

But there’s still a need to connect with others, even outside of romantic relationships, but again, it’s tricky and it’s not about active looking for new “friendships,” so to speak.

“If you look at apps like Whisper or Secret, the need is just connecting with other people and engaging,” said Capecelatro.

And while one could argue that the people one interacts with on Secret are actual friends and friends-of-friends, Twitter is a perfect example of connecting and engaging with all kinds of people. I’ve found Twitter to be a place for anything from pure information, one-off exchanges, online-only “friendships,” and even friendships I’ve even taken into the offline world.

So maybe the future of social discovery is really about making your phone the perfect exploration tool as you roam around the real world.