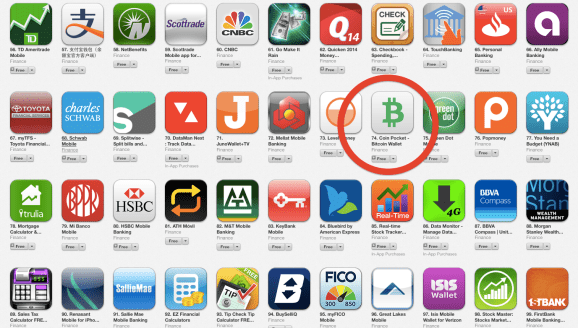 A new Bitcoin wallet app is climbing up the charts in Apple’s App Store after a prohibition on such apps ended recently.

The app, Coin Pocket, made its debut on Friday and is already ranked No. 74 on the list of the top free iPhone apps in the finance category of the App Store.

The Coin Pocket app, from developer Mike Enriquez of Ohio, lets people send and receive Bitcoins on iPhones and iPads.

“Check your state and federal laws on the transmission of Bitcoin or virtual currencies before using the send feature of this app. You are liable for the use of Bitcoin in your jurisdiction,” the app’s description reads.

That makes sense, considering that Apple is keen on regulatory compliance for virtual currency apps. Apple’s new App Store guidelines mandate that such applications must be permissible under state and federal laws in place where people use them.

Several people have offered positive feedback of the app on Reddit and in the App Store itself.