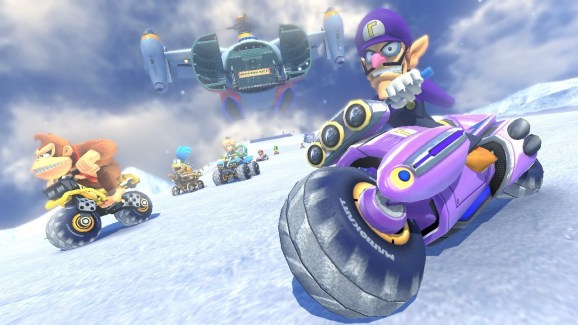 Mario Kart 8 was the second best-selling game of the month.

As expected, new games on new systems helped the video game industry bring in a ton of cash in May.

Gamers spent $586 million on new physical gaming software and hardware in May, according to industry-tracking research firm The NPD Group. That is up 52 percent from $387 million in 2013. Major multiplatform releases like the ope-world Watch Dogs and major exclusives like Mario Kart 8 were big contributors to the strong performance. This is a good sign for everyone making games as it reveals that U.S. consumers can sustain spending at high levels well beyond the holidays, when the year’s biggest blockbusters and news systems go on sale.

Xbox One and PlayStation 4, the two new consoles from Microsoft and Sony, are also continuing to sell well. Hardware generated $187 million in May. That’s up 95 percent year-over-year compared to May 2013’s $96 million.

Consumers spent $274 million on new physical games at retail in May. That’s up 57 percent from $175 million last year. This is one of the biggest months in a while as those who already own devices are now rushing out to get experiences for their new machines.

“After six months of declines, software rebounded in May 2013 driven by new launches such as Watch Dogs, Mario Kart 8, Wolfenstein: The New Order, The Amazing Spider-Man 2, and Kirby: Triple Deluxe,” NPD analyst Liam Callahan said in a statement.

The monthly NPD reports only track new physical games sold at U.S. retailers. This doesn’t count digital sales or hardware sold in Australia, for example. So this is only a snapshot of a much larger picture.

With that out of the way, let’s get to the top-selling software chart.

Game sales saw a huge bump in May. Month over month, game purchases were up 20 percent from $227.9 million. That’s largely due to the massive success of publisher Ubisoft’s Watch Dogs. That open-world hacking game is the French company’s fastest-selling product over a 24-hour period ever. It also racked up more than 4 million in sales in its first week.

What’s most impressive about Mario Kart 8 and Watch Dogs is that both topped the chart for all of May despite debuting at the end of the month. Mario Kart 8 made it to No. 2 with only two days of sales.

New releases had a good month all around. MLB 14: The Show and Wolfenstein: The New Order both released in May and made it into the top five. They even outsold a resurgent Minecraft, which now has physical version on both Xbox 360 and PlayStation 3. This should keep the block-building phenomenon in the top 10 for a few more months.

Beyond the top 5, the only other new game on the chart is the 3DS’s Kirby: Triple Deluxe, which hit the system in early May. This is another example of the power of Nintendo’s franchises.

“Collectively, May 2014 launches sold 800 percent more in dollar sales than May 2013 launches did in their respective launch month,” said Callahan. “New launches represented 50 percent of dollar sales this month, which compared to only 9 percent for new launches in May 2013.”

If you’re looking for a trend in the top 10, I would point out that the PS4 version of Watch Dogs, Wolfenstein, Spider-Man, NBA 2K14, and Call of Duty outsold their Xbox One counterparts. At the Electronic Entertainment Expo tradeshow in Los Angeles last week, Microsoft was all about games — and this sales report shows one of the reasons why.

NPD doesn’t spill a ton of statistics for individual platforms. It’s up to the companies themselves to provide that info. We’re working on getting a comment from Sony, Microsoft, and Nintendo, but the NPD did confirm that Sony is still on top.

May marks the last month where PlayStation 4 will have a clear price advantage over the Xbox One. Sony sells its device for $400, and Microsoft started selling an Xbox One that comes without the Kinect camera on June 9 for $400. Previously, the console sold for $500 with the Kinect.

So far, the PlayStation 4 has built a steady lead on the Xbox One worldwide. After both debuting in November, Sony has sold 7 million PlayStaiton 4s to customers as of early April. Microsoft, meanwhile, has only shipped that it shipped 5 million Xbox Ones to retailers as of April, which means fewer than that have reached the hands of gamers. The Wii U, on the other hand, went on sale in November 2012, and it is only at around 6.2 million as of March.