Sharing music with friends (and others with similar tastes) is a pretty good way to discover new bands and songs. But for some reason, this doesn’t translate very well when it comes to streaming services, despite the many options and methods available.

Recently launched music service Musx (pronounced musics) thinks it knows why: Sharing a song or playlist requires the use of your ears — not a status update on Facebook that forces you to hit a play button.

“Reading a status update on Facebook when a friend shares a song is not the same as sharing that song with them,” Musx founder John Reardon told VentureBeat in an exclusive interview. He added that social networks like Facebook and Twitter aren’t effective when it comes to sharing music because most people don’t go there looking for music. I would definitely agree with that statement, and so would Twitter, which shut down its Twitter Music service back in April after not seeing much traction.

As for Musx, it’s an iOS app focused on a feed of songs shared by friends or other people you may be following. You can also hit “play” to cycle through all that music, which is similar to the experience of people taking turns picking songs at a social gathering. (It uses roughly the same mechanism as Blip.fm, which was once pretty popular.) Musx also pulls content from both YouTube and SoundCloud, which means whatever you’d like to listen to will be available. 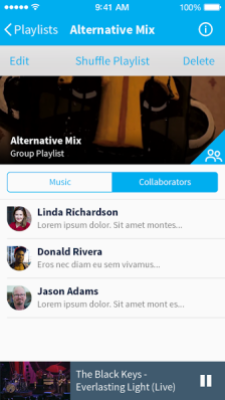 Above: A screenshot of Musx’s new group playlist feature.

With Musx’s most recent update, the startup is focusing even more on driving music discovery through collaboration. The update adds a new “group playlist” feature that acts as an open feed for a subset of listeners, which Reardon told me is perfect for curating music at parties or small social gatherings. In this sense, it’s not very much like a playlist, but I think it works regardless.

Group playlists work by having one person launch a playlist that sends invitations to a specific set of friends. Everyone invited can add songs (you don’t have to take turns as you did with the now defunct Turntable.fm) using the music library stored on your phone.

You still have the option of attaching pictures, or using hashtags, or sharing to other social networks. It’s just that Musx wants to be the social network you spend time on when you actually want to listen to music — not catch up with the lives of your friends from college or hometown.

Reardon declined to share Musx’s user numbers or listening activity but did tell me that the service is being used in over 100 countries and that the iOS app was featured with the iTunes App Store shortly after launching in February.

Musx’s business model includes a mix of iTunes affiliate sales, promoted content, and eventually exporting data about music activity. Reardon explained that right now the team is focused on growing its user base and increasing the amount of time its users spend listening to songs on the service. However, there are plans further down the line to add more tools for music artists.