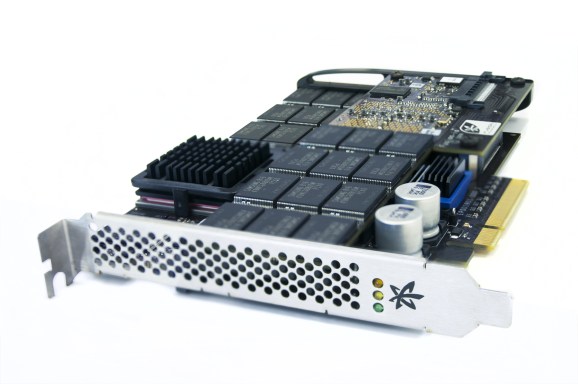 The deal will go through for $1.1 billion in cash, or $11.25 per share in Fusion-io stock, according to a statement.

Fusion-io has an interesting story. It picked up street cred by signing up high-profile customers like Apple, Facebook, and Spotify, as the industry touted Fusion-io’s super-fast reads and writes of data.

Fusion-io went public in 2011. But the company depended on deals with customers that would buy lots of its flash cards, and whenever one big buyer would go away — perhaps to a flash storage vendor that could offer lower prices — revenue would get whopped, and investors would hear about it.

Last year it seemed the company was trying to get things straightened out and start increasing sales at a steady clip.

Diversification of the customer base could have helped, alongside reparations with vendors of servers containing Fusion-io flash cards, like Dell and Hewlett-Packard. But the stock has not rebounded as much as chief executive Shane Robison and others in management expected.

Analysts last year suspected that SanDisk or another flash foundry owner, like Intel or Micro, would buy Fusion-io. So the buyer in today’s deal isn’t a surprise.

The price for the deal isn’t too surprising, either. Fusion-io stock has fluctuated between $8 and $12 for about eight months.

Fusion-io shareholders are already questioning whether the deal is bringing in as much money as it could. Three law firms announced investigations into the matter.