Square Enix is making good headway on its cloud gaming revolution, known as Project Flare. The company believes that the cloud-enabled infrastructure it is building could support virtual game worlds that are 17 times larger than the massive one in The Elder Scrolls V: Skyrim, the 2012 award-winning fantasy title.

The technology still has a long way to go before it gets into a real game. But if Square Enix can truly deliver supercomputing capability to every player through the cloud, it would revolutionize gaming. The question is whether it can really execute on this marvelous vision, which it first unveiled in November 2013.

You could think of Project Flare as “cloud gaming 2.0,” as it is more ambitious in intertwining traditional programming and cloud infrastructure than previous efforts to take advantage of Internet streaming. Square Enix views Flare as a new way to create cloud-based experiences, replacing consoles with virtual supercomputers, said Yoichi Wada, chairman of Square Enix, in an interview with GamesBeat at the recent Electronic Entertainment Expo (E3) trade show in Los Angeles.

“We can create a new kind of game experience,” Wada said.

Wada sees Flare as exponentially scalable, making more efficient use of server hardware to support multiple players on each graphics processing unit (GPU) in the cloud. Flare-enabled clients will access supercomputing power across the Internet.

“This is a research and development demo,” said Jacob Navok, director of business development for Square Enix Holdings. “The last time we met, we had a concept. This is not a final product.” 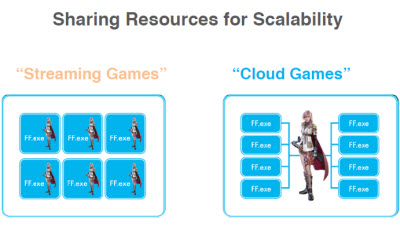 Above: Project Flare taps a single resource. It doesn’t duplicate that resource over and over.

“Our vision is creation of new games and experiences in the cloud, not just changing distribution,” said DeRosa. “We want to change the way games are created to enable completely new creations for gamers. We can create a truly living world.”

For instance, when you play a round of Call of Duty multiplayer, you play each other on servers that reset when the round is over. When you play a massively multiplayer online game, it is often divided into shards, or regions. And it when you reset a section of an MMO, you fight the same creature over and over. 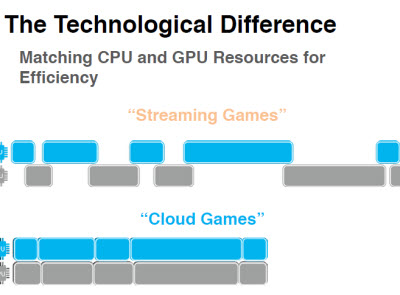 Above: Flare processing is more efficient.

“We need to break the design completely with supercomputer multiplayer,” Navok said. “We hope it enables living worlds.”

Those worlds will be massive and require no loading times. They will be dynamic and detailed. Everything in the world will be calculated, rendered, and be deformable. Every player will share part of a giant game engine. All players will be in the same world. Physics and artificial intelligence are shared across users. Networking, patching, hacking, and pirating will be gone.

You can fly like Superman through a world filled with mountains, rivers, and 620,000 simultaneously rendered trees. Square Enix calculates the entire map, which is fully multiplayer, at once. Then, it encodes the slice of the world that your character can see, and it sends that to your computer or device in real time.

In a demo, Square Enix showed what it called a “swappable animal mammal,” or SAM. There were 500 such SAMs, which looked like zebras or deer, in a single space. They were running on “flocking” A.I. — or behaving like a herd of animals that move in flocks.

When I squeezed a trigger, the SAMs all came running to me. When I pressed a button, they all ran away from me. Each SAM has its own A.I. and reacts to one another.

Square Enix is actively working with partners to develop a consumer service. It is now seeking out developers who embrace its vision for supercomputing cloud games.

“We are looking for content that can take advantage of our technology, and we want to make this very accessible for developers,” Navok said. “We are confident we can solve the tech problems. The infrastructure has improved greatly over the last year.” 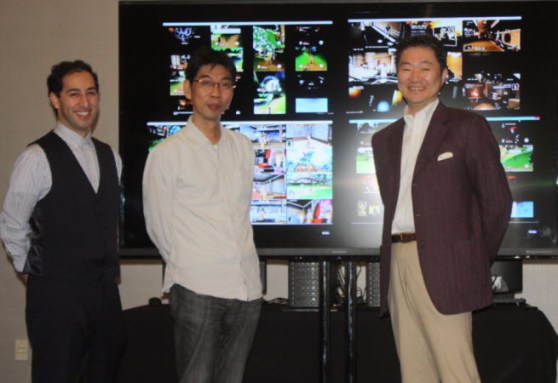 Iwasaki, a developer of games such as Final Fantasy XI, said in an interview, “I enjoyed making high-specification games with beautiful graphics for PC games. As they were ported to consoles, everybody became incredibly sad. All these beautiful assets had to be downgraded. That kind of work is not creative.” 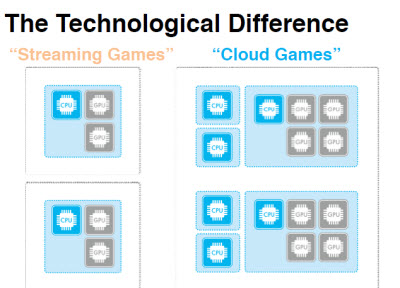 Above: Flare’s cloud games could be better than streaming games.

“When it comes to the cloud, a developer will have the flexibility to design again,” he added. “You take a game, put it up there, and then make adjustments while the game is in service. With MMOs, you have to get positional data on a character. If it doesn’t come at the right time, you have to figure out how to fill those gaps. Doing that kind of processing work is far from being creative. It should become a lot easier to create.”

“I would love to be able to create without technology,” Iwasaki said. “If we can do this, more creative games will result.”

He brought up an example of an older racing game. The max speed for cars in the game was 270 kilometers per hour. The reason was that if the cars moved faster than that, the rendering speed would not be able to keep up.

“We don’t have any of the problems traditional developers have,” Iwasaki said.

The team now has 20 people in engineering and business development.