When we saw the opening five minutes of the upcoming installment of the open-world shooter franchise at developer Ubisoft’s press briefing, something struck me as odd about villain Pagan Min.

Was it his hair? Yes, that was definitely weird. How about his crazy magenta suit? Sure, that was also part of it. Oh, maybe it was the part where he stabs a guy to death and then hands you the murder weapon so you can hold  it while he takes a selfie. That was straight-up nanners.

But the thing that I noticed most was Min’s voice. It was strange and sounded like it was coming from a lot of places at once. So to understand it a little better, I went to Google to see who provides it.

And damn if it isn’t increasingly ubiquitous voice actor Troy Baker, star of BioShock Infinite, The Last of Us, and Infamous: Second Son. He has a pretty distinctive voice, but Min’s doesn’t sound anything like it. And now I understand that guy even less than I did before. Thanks a lot, Google. — Evan Killham

Sure, Microsoft showed off some cool games at its pre-E3 media briefing, but you know what I really enjoyed? The lights! Specifically, Microsoft gave every attendee a wristband that could glow in various colors in sync with each other during the press conference. It was a cool effect, especially when the flashes of colors matched the gameplay or trailer shown on the giant screen. It reminded me of a nighttime spectacular I’d usually only see in a Disney theme park.

I also chuckled a bit when I saw that plenty of attendees were still wearing them at Sony’s press conference. — Mike Minotti

The Most Interesting Person I Met Who Wasn’t a Game Developer Award: Phil the costume guy

Meet Phil [below]. I wasn’t able to catch his last name, or even his good side with my camera, but he’s definitely the most fascinating person I met at E3 who wasn’t a developer. At this year’s show, Phil was Sony’s mascot handler at the PlayStation booth, where a bunch of folks were wearing professional-looking costumes based on upcoming games. I saw some of the quirky warriors from Vlambeer’s Nuclear Throne, one of the pilots from Galak-Z, and even the cute little robot from the PlayRoom app. 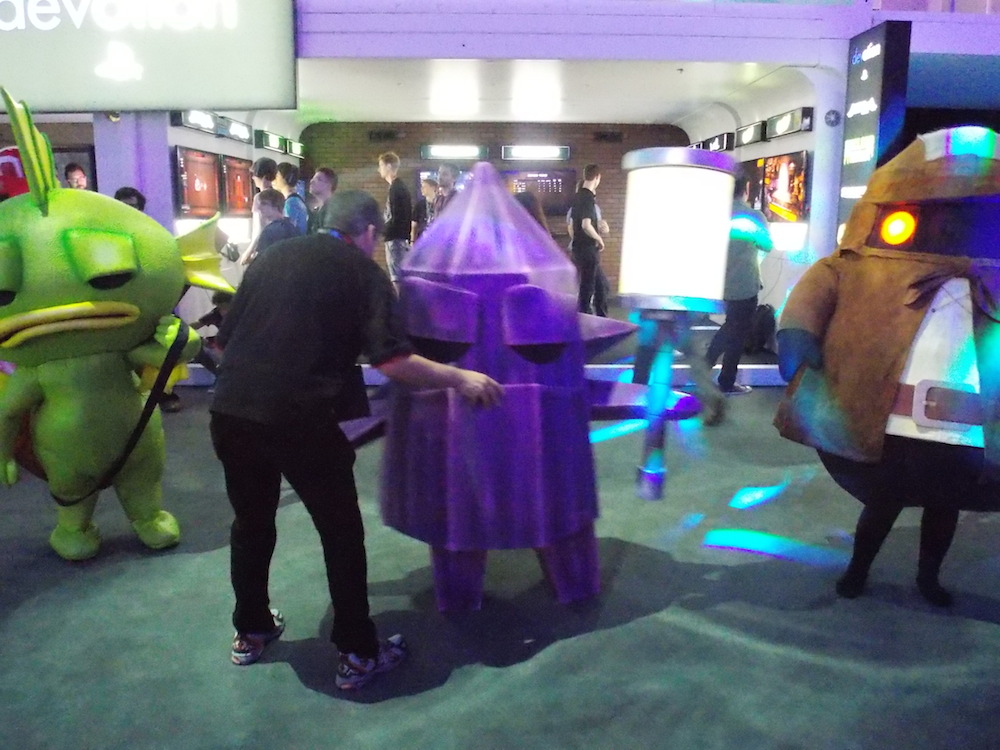 Above: Phil checks in with one of the Nuclear Throne mascots.

I was just killing time when I started talking to Phil, and he told me all sorts of stuff about how long he’s been doing this job. At E3 2013, he was Ratchet (from Ratchet & Clank), and he started doing bicep curls with the heavy wrench when he got bored. I learned about the challenges involved with wearing the hot suits 40 minutes at a time. He kept checking in with the mascots to see if they were fine or to adjust the costumes if they started bending a certain way.

I hope I see him again next year, with or without a costume on. — Giancarlo Valdes

The Shiny Things Award for Most Clever Logo: Evolve

Like when I finally “got” the logo for the upcoming team-based monster shooter Evolve, and it blew my goddamned mind.

Do you see what they did there? The E,V,O, and L represent the four human players; the E is the giant monster they’re fighting; and the V is for “versus” as in “4-vs.-1.” And I just peed a little.

I’m exaggerating a little bit, but it’s not often you see a logo express so much of what a game is about with such basic and simple design, so I have to give it up for the people who made it.

Or I was just really tired. I’m not ruling anything out after that week. — Evan Killham