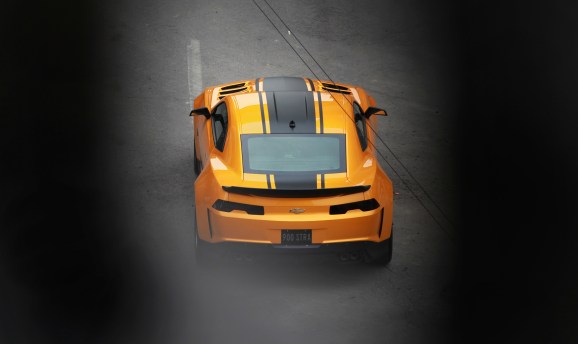 Today Uber plans to reveal Uber “Autobots,” a campaign backed by General Motors and Paramount Pictures to promote the upcoming Transformers 4 film, VentureBeat has learned. Uber did not respond to VentureBeat’s request for comment on the deal.

For consumers, this deal enables users to a ride in a pretend sentient car named Bumble Bee, a star character in the Transformers series, a VentureBeat source shares.

This is not Uber’s first advertising partnership; the company recently partnered up with Activision to promote Call of Duty at E3, and earlier this year, it teamed up with Red Bull. But the three-way-deal to promote General Motors’ 2014 Chevrolet Camaro concept and the Transformers franchise breaks ground. It stretches across three cities, and launches 11 days before the Michael Bay film debuts.

Uber dropped an obvious tip on Twitter last week to build hype, as it did with Uber Rush:

Although Uber often pilot-tests concepts in limited runs, this appears to be the company’s widest reaching ad stunt. Uber is likely hunting for new revenue sources to keep investors at bay as its massive warchest is blown on legal fees, rapid expansion into new cities, and anti-Lyft campaigns.