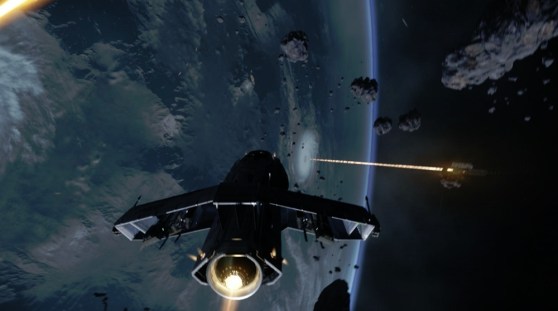 GamesBeat: How many people do you have working on this now?

Roberts: I think at last count it was 268, between contractors and in-house. We have three internal studios – one here in L.A., one in Austin, and one in Manchester. The Manchester one my brother heads up. It was formed from the core nucleus of his team at Traveller’s Tales. Then we’re working with two external studios, one in Montreal and one in Colorado. Between the five studios, we’re all spearheading the different elements of the game.

The game’s pretty modular, so each studio’s taking the lead on one aspect. Squadron 42 is the single-player game. That’s being led out of the U.K. We’re leading space combat here in L.A. The persistent universe and planetside’s happening between Austin and Montreal. First-person shooter is happening in Colorado. It all gets integrated together, but that allows a smaller team to work on an aspect and not get overwhelmed by such an ambitious game.

GamesBeat: Are you building out a vision that you maybe had many years ago?

Roberts: I probably talked to you back in the Freelancer days. I wanted to do Freelancer online. I wanted this dynamic universe. A lot of the ideas I was pitching when I was first doing Freelancer are what I’ll be able to do in Star Citizen. The tech’s there so I can do it now. The financial support’s there. But yeah, I want to build a dynamic universe that’s got that sandbox element to it, but at this level of fidelity, where it looks as good as any triple-A shooter game.

GamesBeat: Do you still have to watch your spending?

Roberts: $46 million is a lot of money, but first of all, you don’t actually get $46 million. You have to pay Paypal and Kickstarter and everyone. It may sound like a lot of money, but in the world of these huge games like Destiny or Halo or whatever—Those guys have 500 to 1,000 people on their teams. We still try to be pretty efficient. We try to figure out where we can be more economical in terms of how we’re outsourcing work and things like that. 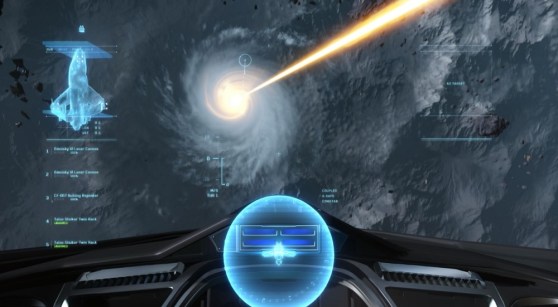 GamesBeat: This is based on Crytek’s engine, right?

Roberts: Yes, this is the CryEngine. We’ve done a lot of modifications and we’ll continue to do more.

GamesBeat: They’ve changed their licensing policies some. Does that help you at all? Or do you have a more general license?

Roberts: Yeah, we bought it out. We’re building this game for the long term. It’s an MMO. Hopefully it lasts as long as something like EVE or World of Warcraft. We need to have control over it. So we basically had to buy it out and control the source and everything. We still get updates from them. We work very closely with Crytek. But their new licensing deal doesn’t factor into what we do.

GamesBeat: Which elements of the game are going to finish first? What targets are you looking at right now?

Roberts: It’s hard to say. This year we’re going to show the first-person combat. We have a couple of big iterations on the Arena Commander, with things like multi-crew ships and some other functionality. Next year we’re going to be showing the planetside stuff. We’re starting Squadron 42, the first set of episodes there. Then we’ll have the persistent universe. We’ll start with a smaller elements, like one system, and then we’ll add more systems and keep on adding until the content’s complete.

The backers should be able to fly around in a small version of a persistent universe toward the end of next year. By the end of next year, the beginning of the following year, everything will be feature and content complete. All along the way, though, they’ll be playing. They can play this, go head to head against other people. That’s kind of the content curve.

When you get people in early in development—Inside a publisher, the games go on for years. The end user doesn’t realize that game was in development for four years or five years. A lot of times it’ll get pushed back a year or so and you don’t even know that happened. But we’re doing this totally publicly. Sharing as we go along is one of the big ideas. It forces the team to focus on finishing it and making it stable and polished. When you put something out in public, you don’t want to do it half-assed. It’s very good for cohesion and making the game work well.

When you have people playing it and seeing it grow, they feel like, “Okay, I backed this thing. They’re working hard. I’m getting to play it and I’m having fun.” My goal is, by the time the game is done, a lot of the early backers will say, “It’s all gravy from here. I’ve already had a lot of fun playing the game and giving feedback.” The goal is to take everyone along with us on the journey.

I do think that’s one reason we’ve done so well. We’ve paid attention to interacting with the community. If you go to our website, we do eight to 10 posts a week. We have two or three video segments that we share with everyone. We show them what we’re developing. We give our backers a monthly report, just like you would with a publisher. 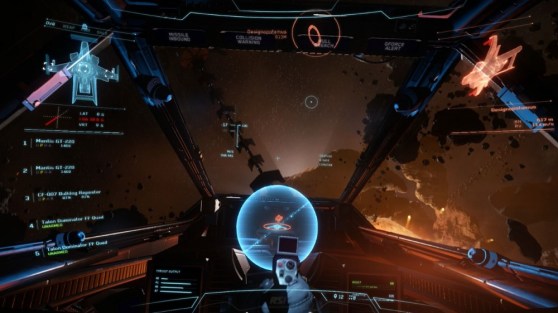 GamesBeat: You’re kind of showing everyone in the industry how to do this.

Roberts: I don’t know if we’re showing anyone. We’re just doing what seems to work for us. It’s nice. I very rarely used to get to meet people that enjoyed my games. Ever since I started doing this, because we do a lot more community-focused events, I get to meet people, and it’s really cool. You meet someone who says, “The first game I played was Wing Commander. I became a pilot because I played Wing Commander.” I never thought I’d have that kind of impact.

There’s a sense, when you get to connect with the community on a closer basis—You feel like the work you’re doing matters. People really care. Sometimes, in the more business-oriented publishing side, you lose focus on that. You do all this fighting with the machinery. When’s my release date? Can I get enough marketing dollars? All that stuff that comes in with big business and big publishing. When you’re going straight to the gamer, you don’t have as much of that.