Lumosity has more than 60 million members using its brain-training app. So, the company is finally launching an app on Android. 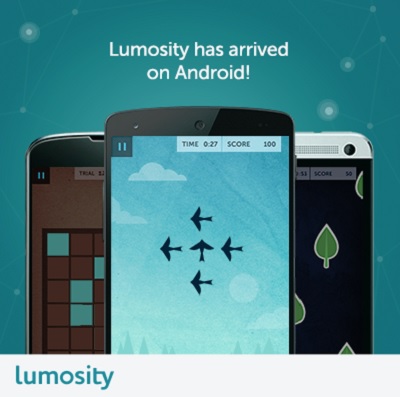 Above: Lumosity on Android.

The San Francisco-based firm hopes to raise the collective IQ of its users through games that make them use their brains. The apps use neuroscience research as a foundation. Lumosity started in 2005, and it launched its first Web application in 2007. Its service has grown dramatically on iOS, and nearly half of its new users come from mobile. The company advertises heavily on traditional media, so you’ve probably seen its marketing.

“We’re excited to launch our Android app, which will allow us to reach more users and provide them with a convenient and fun way to train with Lumosity from anywhere at any time,” said Kunal Sarkar, CEO of Lumosity, in a statement. “Our goal is to create the best, most accessible brain training experience, and with Android reaching 80 percent of the smartphone market share worldwide, launching on Android is an important step toward that goal.”

The company plans to invest heavily in mobile by expanding to new languages and increasing its mobile-games library. Lumosity currently has 40 games designed to challenge your core cognitive abilities. Lumosity’s iPhone and iPad apps have consistently held the top spots in the education category of the U.S. App Store. The iPhone app has hit No. 1 in education in 71 countries and No. 1 for the iPad in 111 countries.

Lumosity has raised more than $67.5 million since its founding, and it has 120 employees. It plans to add 50 new employees by the end of this year.