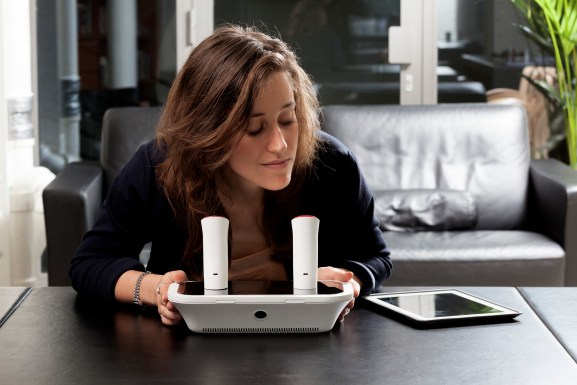 The next time you take a photo of your latest culinary masterpiece, why not add smells? Starting next year, you just might be able to. 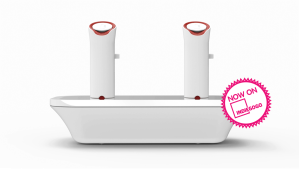 Above: The oPhone device that makes smell sharing messages possible.

A free iPhone app called oSnap is out today, enabling you to snap photos and select areas within an image to contain those smells. To smell, you or your friends will need an accompanying piece of hardware, called an oPhone, that looks like two cannoli standing on end. [See photo to the right.]

With the app, you can choose from 300,000 scents, which you can save to photos to email or post to friends. A click by the lucky recipient on the photo smell-spot pulls up the scent profile on the nearby oPhone (via Bluetooth), which generates the whiff. Presumably, you should look at the photo on your phone at the same time to get the full effect. OSnap is calling these scented messages — which can actually be photos, text messages, or sounds —  oNotes. (Check out the video embedded below for a closer look.)

This, of course, is not mankind’s first attempt to tap into the olfactory input.

“The use of aroma in technology has been focused on creating a scent that has a volume to it and lingers,” co-inventor David Edwards told VentureBeat. He’s an engineer/artist hybrid, head of the Cambridge, Mass.- and Paris-based Vapor Communications as well as a professor at Harvard. 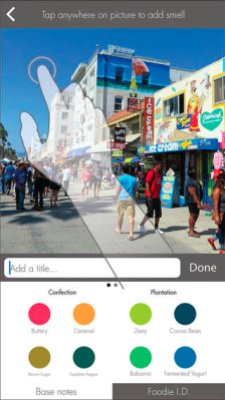 Above: The next form of social media?

“But how do you create those aroma signals so they come and go, to get complex signals like [you smell in] a meal or walking through a neighborhood?” he said.

The answer, Edwards discovered with co-inventor Rachel Field, is the use of small packets filled with aromatic materials to “evoke a scent that does not linger long.” The device, Edwards explained, was initially invented in a class he taught at Harvard, where Field was a student.

The packets are in oChips, which Edwards described as “ink cartridges for aromas.” The subtlety of the smell is obtained, in part, by rotating the oChips when the signal arrives, thus exposing small holes and causing the aroma to be “pulled out of the capsules.”

The oPhone device has eight replaceable oChips, each with four aromas, creating 32 basic smells. These smells include balsalmic, smokey, fishy, yeasty, and chocolate — which, in combination, can generate the thousands of scents. The first aromatic vocabulary is based on food, but other options are coming. (Freshly mowed grass, anyone?)

But like many sweet ideas these days, the oPhone first must prove its chops on Indiegogo. OPhone’s fundraising campaign has 45 days left to find $150,000, which is intended to fund initial production of the oPhone. Development thus far has been backed by angel funding. Plans are for the oPhone to be available next year at a retail price of $200, and scented oNote photos will be available for downloading at public hotspots in Paris, New York City and Cambridge.

Like any modern startup, this one believes it is building more than a smelly line of products.

And, if it works as advertised, the smells will generate their own followup products. Once we whiff those Parisian baked goods without leaving our living room in the Eastern U.S., for instance, we’ll be standing in line for the tastebud add-on.