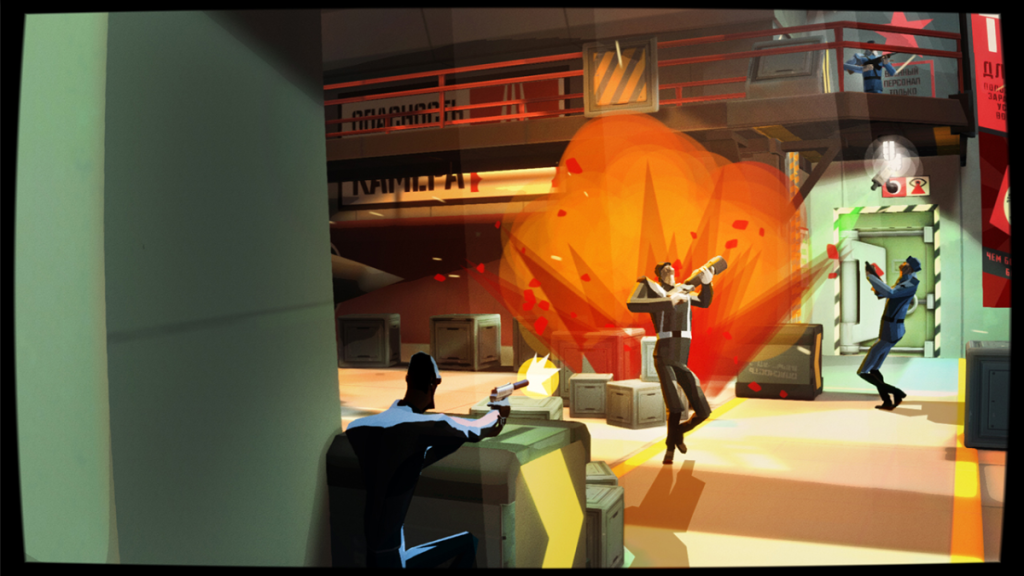 Above: The cover view in CounterSpy.

CounterSpy is a triple-threat. It has great art, unique gameplay, and a fun story. Players assume the role of spy in an alternate version of the Cold Wars in the 1950s and 1960s. You must stop the world’s superpowers from blowing themselves up — or from destroying the moon.

It’s technically a third-person shooter, but it focuses more on stealth attacks more than anything else. Guns are a last resort in CounterSpy. There is also a really unique cover mechanic in which the camera angle shifts from traditional side-scrolling to an overhead third-person camera, which allows players to more accurately take out targets and security cameras.

When I was playing through the CounterSpy demo, I couldn’t help but feel a sense of familiarity. I hadn’t played a game like this, but I had definitely seen something like this before.

Creative Director David Nottingham of CounterSpy developer Dynamighty explained my nostalgia. “The way we look at this fictional world we related is like this: It is one part The Incredibles, mixed with some obvious Bond elements, and finished with a little bit of Dr. Strangelove,” he said.

Yup. That pretty much nails it. Nottingham went on to mention that the art director, Mark Holmes, was a 16-year veteran of Pixar. I didn’t automatically make the connection, but it definitely makes sense when I look at trailers for the game. CounterSpy is like an interactive Pixar movie with an adult theme. Looking for some warm animation in the Cold War era? Check out CounterSpy.

Guns Up! is a real-time strategy game from veteran game art studio Valkyrie Entertainment. The game’s name was whispered among journalists at the convention. GamesBeat lead writer Dean Takahashi told me that Sony Worldwide Studios America development head Scott Rohde highlighted the game during an interview.

I decided to check it out, and Jason Coker, an associate producer with publisher Sony Computer Entertainment, was there to greet me.

“Sony really fell in love with this game early,” Coker said. “Valkyrie is a well-known art house, and we trust them to make a great game.”

I can certainly see the potential in a game like Guns Up! The playable version was just a rough game concept, but free-to-play strategy games typically have a very high multiplayer ceiling. People like to compete against each other in simple strategy games, and Guns Up! has the mechanics and design to create a pretty solid multiplayer experience.

I am not quite sold on the single-player. I think just destroying an A.I. base over and over again would get very repetitive. However, the game still has months of development left, so that could change.

There isn’t anything inherently awesome about the early Guns Up! demo, but it has a chance to be a very solid title for Sony.

Helldivers is a top-down shooter from Arrowhead Game Studios that also had some hype behind it.

I decided to check it out, and Arrowhead programmer Mikael Bauer sold me on Helldivers with a few key words. “We created Magicka and some of Magicka’s key elements in the game,” he said. “But we were also heavily influenced by Starship Troopers.”

Wait, Magicka and Starship Troopers? So do I make this blank check out to Sony or Arrowhead? Should I put Helldivers in the note section?

The game reaches back to a forgotten era. The over-the-top camera angle and extreme difficulty definitely lend to a mid-’90s feel. Helldivers features a tricky d-pad command system in which players must input a series of direction buttons in order to do things like resurrect teammates or call for ammo.

Up to four players team up to battle swarms of alien bugs on various planets. Helldivers is definitely a game that you and your friends will want to buy and play together, as a lot of teamwork is required to conquer the difficult game.

Plus, it is the closest thing we will get to a decent Starship Troopers game. Remember: The only good bug is a dead bug.

White Night is a survival-horror game from Osome Studio. I found it pretty late in my search, and the incredibly macabre art style drew me in.

Everything in White Night is either pitch black or a blindingly bright white. It follows simple survival-horror rules. Your character must evade or outsmart the evil ghosts that inhabit the rickety old house he is camped out in. If they find him, it’s game over.

Mathieu Fremont of Osome Studio explained some of the inspirations for White Night. “The game is a narrative survival-horror with some film noir and Hitchcock[ian] elements,” he said. “We really liked the idea of using electric light as your only weapon, and we combined it with a sort of 1930s-era horror theme.”

The game is difficult and plays like an interactive horror movie. The sudden changes in light and contrast really put you on edge. Darkness is a scary place in White Night, and well-lit areas feel safe.

I also really enjoyed the internal monologues of the game’s protagonist, a pseudo-1930s private-eye type. The writing and dialogue was quite well crafted.

I don’t know if White Night has the mainstream appeal of some of my other choices, but horror fans will definitely want to check it out.

Elegy for a Dead World

This is where things get weird. Elegy for a Dead World isn’t really a video game; it shared little with the games surrounding it in the IndieCade at E3. However, after three days of indie games, I was drawn to something completely off-the-wall.

Elegy for a Dead World is a joint effort of Dejobaan Games and Popcannibal Games. The best way to describe it is a hyper-intellectualized sci-fi Mad Libs simulator.

I will try to explain.

Players move across three dead planets and encounter markers along the way. Each marker displays a sort-of command prompt with sentences that have empty spaces for the player to write in. You fill in the blanks à la Mad Libs. There are no instructions or set rules for this. It is a creative writing simulator where you can create any kind of story or poem you want. Players’ finished diaries are then posted on a public steam forum where everyone can read and discuss each other’s works.

Popcannibal found Ziba Scott tried to clue me in on what was going on. “We started out by drawing some interested backgrounds inspired by Rendezvous with Rama, this great book by Arthur C. Clarke about wandering through space,” he said. “We showed it to a friend, and he told a completely different story than the one we had in mind. We thought, ‘Holy crap, our story isn’t the important thing here. It’s pulling people’s stories out of what they see that is the real interesting thing here.'”

As a writer, I think it is a great idea that has some real interesting possibilities, especially in terms of fostering a sense of community among young, creative people. But it isn’t much of a game. If you are easily bored or frightened by change, Elegy for a Dead World may not be your thing.