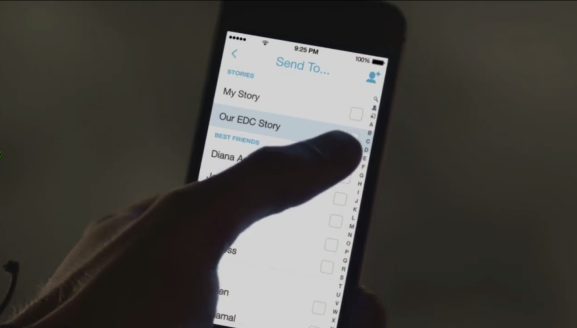 Snapchat is at it again: adding new features in an attempt to spice up the good old experience and looking less like the simple and addictive Snapchat we all grew up with.

Today, the company announced “Our Story,” a feature that’s basically a giant collection of “Snaps” (pictures and videos) centered around an event. And the first event to get its own dedicated story? The Electric Daisy Carnival (EDC), an annual gathering of 18-year-olds in Las Vegas, all there to enjoy extreme heat, various substances, and electronic dance music for a whole weekend.

Here’s how “Our Story” works: Each featured event gets its own thread of posts which people can contribute to as well as view. The special thread, in EDC’s case “Our EDC Story,” will appear in your “Send to …” page as long as you’re at the event’s location.

When we introduced My Story we never could have imagined how powerful it would be to string those moments together into a narrative. We love watching the day unfold with our friends.

But My Story has always represented a singular, personal experience. We wanted to build something that offered a community perspective – lots of different points of view. After all, our friends often see the same things in totally different ways.

We built Our Story so that Snapchatters who are at the same event location can contribute Snaps to the same Story. If you can’t make it to an event, watching Our Story makes you feel like you’re right there! It’s really easy to use.

That last sentence highlights the concept of “ambient awareness,” the idea that constant connection through quick messages and interactions creates a feeling actual social connection. This has often been observed, for example, in the context of couples who are apart and stay connected through frequent text messages throughout the day. Snapchat’s original Stories feature was a first step in helping create that, and now the shared stories will likely bring that experience to the poor young person that has to miss EDC this year.

Moreover, this could also be the Snapchat feature that truly rivals Twitter. Just as people huddle around an event to comment and discuss and share in an open forum, often through designated hashtags, people will be able to do the same through these shared stories. Twitter’s recent attempts to unite people for the World Cup have led some to revolt.

Perhaps most important, this new feature could be Snapchat’s first built-in space for ads. Picture this: You’re at an event, EDC for example, and while you’re checking out the feed of sparkly posts, a picture or video from one of the event sponsors appears and informs you of its booth or the performance it’s sponsoring.

It’s noteworthy that the company has several employees working on “business and marketing partnerships” and even hired a vice president of monetization. So, Snapchat’s next feature? Likely ads.

But don’t worry, Snapchat still has a philanthropic bone in its body — it will provide free Wi-Fi at EDC this weekend so you can Snapchat at your heart’s content without worrying about your data plan.