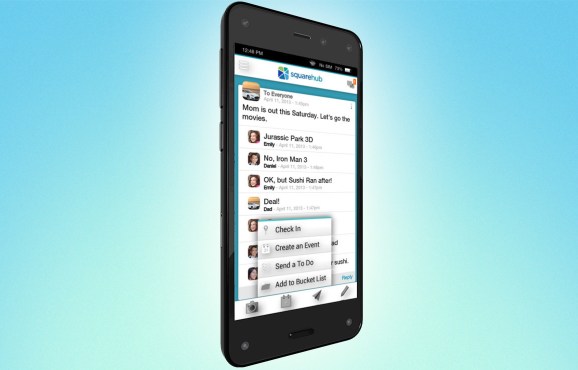 And then the real fun started.

Amazon did a great job abstracting the Fire Phone’s bells and whistles into accessible libraries for developers, said Cotter. That’s enabled Cotter, a former general manager for Amazon, to bring some of the Fire Phone’s whiz-bang 3D features into the Squarehub app, a private social network for families and their kids.

“We have a lot of experience developing on the different platforms, and this is a pretty special device,” Cotter told VentureBeat.

“I think people are going to surprised how quickly they can go from an existing Android app to something that works on the Fire Phone.”

On Amazon’s new device, you can navigate throughout the Squarehub app with a motion gestures — no swipes, pokes, or expand motions required. There’s no option to shut them off if folks prefer a more classic style of navigation, but Cotter characterized the app’s 3D elements as subtle and easy on the eyes.

“There is something about the 3D experience that is just a lot more immersive and engaging,” he said.

“Anything that causes a family to be more engaged with the UI… means that they’re happier users and they’re going to use the app more.”

Folks using Squarehub can add items to their “bucket list,” a list of stuff they want to buy. Square earns revenue by referring its users to shopping sites like Amazon and eBay where they can buy those items. It’s pretty easy to envision a feature like Firefly, which employs 3D image recognition technology to identify real-world objects, becoming an essential part of Squarehub’s revenue on the Fire Phone. With Firefly, you can snap a picture, identify a product, and buy it on Amazon — all inside another app.

“We can’t wait to see how the developer community will surprise us with what they do with Firefly,” said Amazon chief Jeff Bezos at the Fire Phone unveiling today.