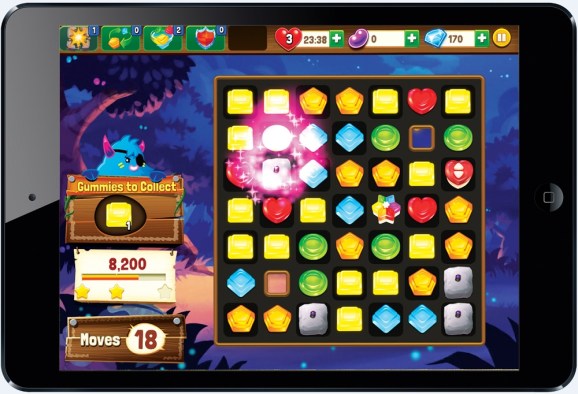 Mind Candy, the U.K. company behind the Moshi Monsters game with 80 million registered users, is launching its next big title today. Moshling Rescue is a “match 3” title in the genre of Bejeweled and Candy Crush Saga, and it is aimed at the parents of the kids who play Mind Candy’s gargantuan kids game.

Moshling Rescue is available now as a free-to-play game on iOS and Facebook. London-based Mind Candy has become a transmedia entertainment company in the past decade on the strength of Moshi Monsters. Besides several games, Moshi Monsters has spawned a theatrical feature film, a top five music album, the No. 1 kids magazine in the U.K., toys, and other merchandise.

Moshling Rescue could extend that empire, as it is targeted at the moms and dads of Moshi Monsters fans. The game is Mind Candy’s first major foray into the North American market. Mind Candy describes Moshling Rescue as is the “next evolution of Match-3 gameplay, combining a variety of unique gameplay modes with a character-driven narrative and a unique collection mechanic, to provide hours of enjoyment for an older audience.”

Players have to match gummies to rescue Moshlings across hundreds of adventure-style levels. When the play gets difficult, gamers can purchase boosts and extra lives. It has six game modes such as Home mode, where a player must collect specific gummies to move a Moshling across a track to reach home.

Players can connect the mobile or tablet version of Moshling Rescue with a Facebook account to pick up and play where they left off. Players will also get an extra life across both platforms by connecting to a Facebook account.

“Mind Candy has expanded from just kids entertainment to becoming a broader family entertainment company.” said CEO and founder of Mind Candy, Michael Acton Smith. “This is our first game aimed at an older audience and we’re incredibly excited about launching it.”

Players can download the game for free but pay real money for certain game items. In the future, Mind Candy will offer content updates and release the game on Android.