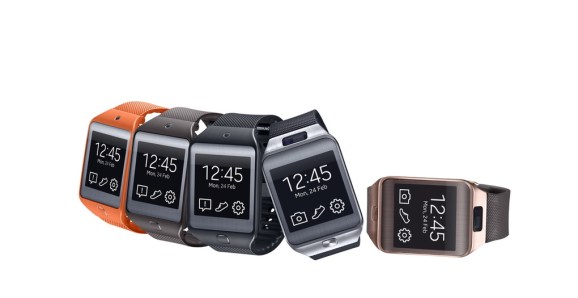 Samsung’s Gear 2 smartwatch lets its users check texts without having to fish for a phone. However, until today, you had to use your smartphone to reply, which made the notification on your wrist only partially useful.

Now it’s possible to reply to them as well. Fleksy Messenger, out today, is a Gear 2 SMS messaging app that brings Fleksy’s intelligent keyboard to the smartwatch screen. It’s ideal for short replies on the go. Fleksy’s intelligent algorithm turns gibberish into actual words:

“Fleksy’s vision is to have zero learning curve,” said Ioannis Verdelis, Founder and COO at Fleksy, in an interview with VentureBeat.

“Based on a technology we have invented, called Geometric Intelligence, Fleksy allows really sloppy typing. Even if you miss every single letter of a word — which can happen a lot in a small screen — Fleksy delivers really accurate corrections.”

The keyboard features the standard QWERTY layout. Users tap to type like on any other keyboard. It features an optional gesture interface. To delete a word, flick left. To add a space, swipe right. For a second word suggestion, flick down.

The wearable tech market is quickly evolving. New use cases, especially in the realm of fitness, are being created every day. Ioannis points to Samsung Gear showing the first implementation of some productivity use cases. “Devices are getting ‘prettier,’ lighter, and more widely acceptable,” he says. “We are very excited to see how the key players evolve their devices, the arrival of Android Wear, and to showcase new use cases for wearable tech to move towards mass adoption.

“When the first smartphone came out, people questioned whether it would be possible to type on glass,” Ioannis says. “Fleksy’s next generation accuracy running on a smartwatch really has to be seen to be believed. We are very proud to be working with Samsung Gear 2 to show it to the world.”