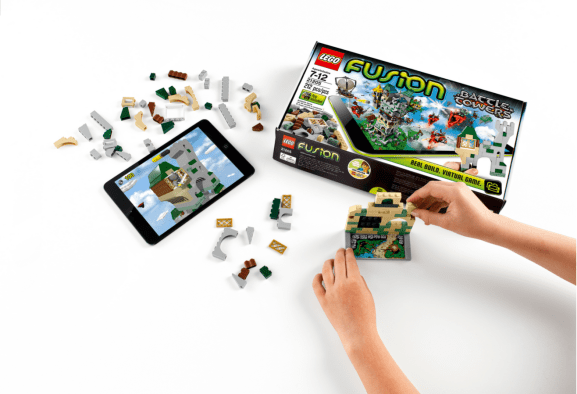 Lego already has its Fusion products, but it may now work with WB on a new line of interactive toys.

Lego might seem like the ultimate interactive toy, but it’s about to get a bit of help from the digital side of things. The company is introducing Lego Fusion, a new product line that will combine the classic building blocks with mobile apps that use augmented-reality-like technology to incorporate what you build into different games.

Lego Fusion is the first product from a newly formed organization called Lego Future Lab, and if the idea of games and toys interacting with one another sounds familiar that’s because Fusion is definitely a riff on the “toys-to-life” genre that Activision invented with Skylanders. That console release enables players to zap their toys into games instantly by placing them on a USB-connected portal. Skylanders has made more than $2 billion in toy and game sales since debuting in 2011, and Lego thinks Fusion has the potential to snap into that market. But the toy brick company thinks it can set itself apart by encouraging its players to spend as much time with the physical toys as they do with the digital games.

Lego Fusion will start with four collections that each come with their own pieces, their own portal, and their own mobile app. The portal enables the app to see the pieces and easily size them up for scanning into the digital landscape. The first set will go on sale in August for $35.

The four sets include Town Master, Battle Towers, Create & Race, and Resort Designer. Each one comes with more than 200 Lego bricks and a specialized app that guides players through an interactive experience. Town Master has players building a small city that they then scan into the game. Interactive minifigure citizens then move into the creation. Battle Towers is about making structures to defend from attack. Create & Race has you make cars to drive in the app. Finally, Resort Designer focuses on designing homes, shops, and more for a beach resort.

While these Lego Fusion sets come with their own bricks, builders can use any brick from other sets as well—the game will recognize the shape, but it may not accurately import the color.

“Children have always imagined their Lego creations as immersive worlds which come to life for hours of role-play and adventure,” Lego Future Lab senior design manager Ditte Bruun Pedersen said in a statement. “Recently, smart phones and tablets have become a popular platform for empowering game mechanisms that kids love. Lego Fusion brings these two favorite play patterns together in an experience where real-life Lego builds come to life in a virtual game, inspiring creativity, strategy, and the pride of creation.”

But the interplay between the physical bricks and the digital world doesn’t end after the initial building phase. Lego wants to bounce its players back out of the app experience at regular intervals to do more building.

“In our research, we heard repeatedly from parents that they are constantly battling ‘zombie gaze,’ the experience when their children are immersed in their device screens for large blocks of time,” Pedersen said. “We developed Lego Fusion with this challenge in mind, creating a play experience that keeps children entertained with the kind of app gameplay they love while giving real reasons to return to the brick pile to creatively build.”

In the Town Master game, you build a town, scan it into the game, and then interact with the digital citizens using the app — but then those citizens may pose a problem that you can only solve by building something new using the real bricks. The same goes for Battle Towers, where you must rebuild structures damaged in the game. Create & Race and Resort Designer feature similar elements.

Lego obviously sees the money that Activision is making, and it is trying to figure out a unique way for its product to compete in the Skylanders space.

With Lego Fusion, the brick-building company doesn’t only join Activision in the toy-game biz — Disney and Nintendo also have their own line of interactive toys. Disney Infinity debuted in 2013, and it was one of the best selling games last year. At the major Electronic Entertainment Expo trade show last week, Nintendo introduced its Amiibo figures, which will enable players to get bonuses by using figures of Mario, Samus, and other Nintendo favorites in a number big releases like Mario Kart 8 and Super Smash Bros. Hasbro, another toy company, even has its own Telepods line that it has already incorporated into some Angry Birds mobile games from developer Rovio.

It’s no surprise that Lego and the rest of these companies are rushing to fill this space. In 2012, the Skylanders toys outsold the Star Wars and Transformers product lines to take the spot as the best-selling toys of the year. That doesn’t even include game sales, which contributed several million more dollars to Activision’s bottom line.