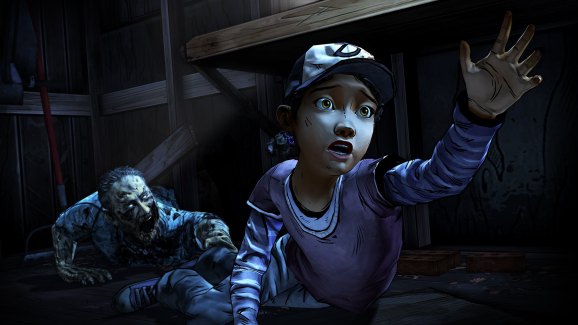 There are a few callbacks to Season One in All That Remains, including Clem's hat.

Telltale Games scored big with The Walking Dead, the post-apocalypse game that forced players to make tough choices about which friends to save from zombies.

It drew such an emotional response from players that it sold millions of episodes and won numerous Game of the Year awards.

Founded by former LucasArts game developers, the company made a bet early on that it could hook players with monthly episodes of its digital games. Clearly, that strategy is working.

Dan Connors, chief executive of Telltale, said that the company never strayed from its vision, and it has now a good idea what it means to create a Telltale experience. We caught up with Connors at the Electronic Entertainment Expo (E3) video game trade show in Los Angeles last week.

GamesBeat: You guys have a long history, but this seems like a particularly good time for you.

Dan Connors: When we set out in 2004 to build a company based on digital distribution, using episodic content as a way to keep people engaged, we didn’t realize that it would take so long, but it’s finally here. Now we have digital distribution on all the major platforms. We’re working with the biggest licenses in the world. We’ve been able to create a gameplay style that resonates with gamers and fans of licenses alike.

GamesBeat: I don’t remember exactly when, but I remember IDG was part of funding you guys. When you raised money, did you understand what you were trying to do at the time?

Connors: Chris Hollenbeck led the round for Granite. That was 2007. 2007 and 2010 were when we did the two financing rounds. We had Sam and Max. We were working on the CSI games. I think we were attractive. We had a healthy business. It wasn’t like we were going to take a bunch of investment money, drop it all in a product, and hope that product hit. We had the GameTap relationship. We had the Ubisoft relationship. We had Telltalegames.com, which was a fairly good channel at that time, generating revenue for us. We had multiple revenue streams. The investment was truly about scaling the business up.

GamesBeat: Did you remember much competition at the time? Episodic was something fairly new then.

Connors: Back in 2004, the excitement was mostly about mobile phones – JAMDAT-style, phone games. Then, around 2006 or 2007, there was a big fascination with user-generated content. Inevitably we would go in and it would always be about the last thing to take off. But we were always very much sticking to our guys and saying, “This is the way. This is going to take off. This is the right way to do this type of entertainment.” We never stray from story. We never stray from small chunks of content released over time. Those are always the two keys.

GamesBeat: With The Walking Dead, what would you say came together to make that such a big game for you?

Connors: We built the company around episodic development of core-quality content, which was a non-trivial thing to do. We went out and continued to get a growing scale of licenses. We built out multiplatform distribution across six channels, I think, by the time Walking Dead came out. We set out to create a publishing infrastructure to enable the games we wanted to build. 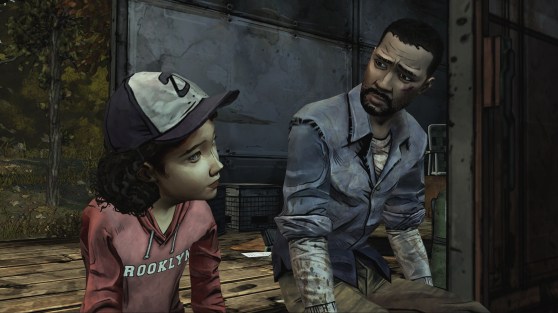 Above: The Walking Dead

By the time we took on the Amblin franchises, with Back to the Future and Jurassic Park, we’d started to experiment with interactive storytelling, drama, plot, and the right ways to execute them. Those two games were really transitional for us, in moving away from a traditional adventure-game model and to an interactive narrative model that could be enjoyed by people who were just fans of the franchise, just interested in experiencing a story.

GamesBeat: And then The Walking Dead show was a hit.

Connors: The show took off, yeah. The things the Walking Dead game did were so unique to it inside the interactive space that I think it probably could have succeeded, though, at least on a critical level, without the franchise. The franchise is great and brought a lot of people to it, but I think the gameplay evolutions of it were real enough and tangible enough that it would have been noticed.

GamesBeat: I played the whole first series there. I kept hearing so much about it that I wanted to experience what was so emotional there. There’s more in the story. I’m curious about what you do that pulls people in.

Connors: It’s a commitment to making sure the story feels playable. In Call of Duty, you could see a great cutscene that creates a lot of emotion around the characters that you’re with, but then you go and play the mission, and by the time you come back to the story again, that emotional connection is gone. It’s too big of a separation. You can try to carry it through the gameplay experience, but then it’s to the detriment of that gameplay. It’s a hard thing to get both.

With Telltale, we just decided to commit to making people care about the characters as much as we could, making the characters feel as real as they could, and then putting the player in compelling situations and making them make choices. We committed to that at the core of the product. That was what the product would be about. Call of Duty is still about being a great action game. It does that very well, but it’s hard to coexist that with strong storytelling in that environment. Our games are for someone who wants to sit down and feel like they’re immersed inside the story in a new and different way.