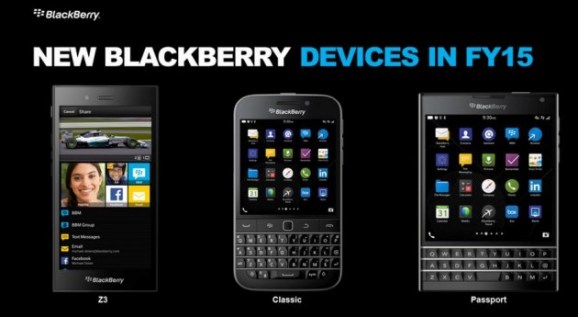 BlackBerry's next round of devices: The Z3, Classic, and Passport

BlackBerry isn’t giving up on its smartphone business just yet.

CEO John Chen announced BlackBerry’s latest smartphone, Passport, during the company’s quarterly earnings report. The phone reportedly has a 4.5-inch 1,440×1,440 pixel screen. It is also rumored to have a touch-sensitive keyboard panel for easier autocorrection.

This is a big moment for mobile phones. Last week Apple revealed a revamped iOS with an open app SDK — meaning apps can communicate with each other much like they do on Android devices. And just yesterday Jeff Bezos announced Amazon’s smartphone, Fire, which offers an array of new features like a 3-D interface, head-motion sensors, and image recognition software– that last one, called Firefly, is able to identify an object you’ve taken a picture of and tell you where you can purchase it. Next week at Google I/O there will be even more announcements concerning Android updates and wear.

As a mobile phone maker, BlackBerry had to bring something to the table, even though its been putting an emphasis on software and services in recent months — not mobile phone hardware.

BlackBerry probably realizes that mobile hardware is not its primary moneymaker, but that doesn’t mean it shouldn’t stay competitive. The company did sell 2.6 million phones through retailers this past quarter, which doesn’t come near to Apple’s share of the market, but is still a substantial number.

Chen says the phone will make its debut at an event in London in September, but is keeping mum about the rest.