As the world’s biggest game retailer, GameStop isn’t feeling doomed because of the threat of digital distribution. Rather, the chain with 6,600 GameStop stores feels a refreshing breeze thanks to a strong May for physical game sales, a price change for the Xbox One, and a hoard of new stuff coming this fall for hardcore gamers.

Tony Bartel, the president of the Grapevine, Texas-based company, said in an interview with GamesBeat that he was excited by all of the new announcements at E3. While summer may have a light release schedule, September through November will be loaded with blockbuster games. Bartel gave us his reactions to many of the major announcements at the show, adding perspective that will help everybody understand what is going to sell and what will be important for the game business in the long haul. The bottom line: He’s optimistic that physical retail will have its place in the larger digital game business — and that GameStop will continue to get 500 million people a year walking through its stores.

Here’s an edited transcript of our chat. 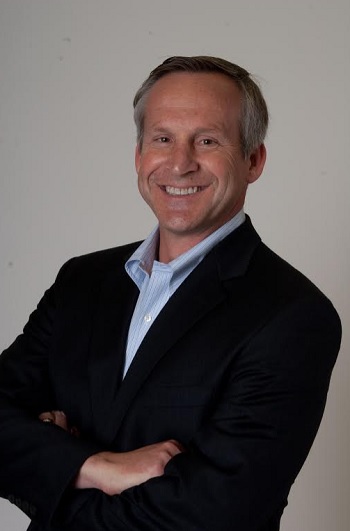 Above: Tony Bartel, the president of GameStop.

GamesBeat: What were your impressions of the show?

Tony Bartel: First of all, incredible excitement around the category. One has to be impressed by the focus on the gamer, particularly the core gamer, when you watched all the presentations by Microsoft and Sony, EA, and Ubisoft. Very much focused on the gamer. We were excited walking out of there. We had tremendous meetings with all of our publishing partners.

One, it’s going to be a very good holiday. Also, the summer just got stronger, with The Last of Us in late July. When you look at the summer releases, GTA has been announced, and Hardline. We got a good glimpse of those. Evolve looks strong. That was a surprise hit for many people. It was very strong for the core gamer and a huge win for gaming in general.

GamesBeat: We always see a mixed picture there. They announced a lot of new titles, but a lot of others slipped into 2015. How do you balance that out?

Bartel: A few did, which I think is okay. It feels like there’s going to be a plethora of titles in that September-October-November time frame. It’s a very busy time for gamers. We’re constantly working with publishers and saying, “Hey, it’s okay to spread some of those titles out.” We see a very flush September through November. The key is going to be putting those titles in the hands of gamers.

GamesBeat: Otherwise, do you feel like we’re in a bit of a light schedule for the summer? Is it lighter than usual?

Bartel: The fourth quarter is always the highest quarter. With NCAA [Football] not being available this year, that was something we’ll miss from the year before. But we had Watch Dogs, which is doing phenomenally well. We had tremendous acceleration on our pre-sales on that title. That’s a good barometer, when you come into a titles and pre-sales start taking off. We had a very significant additional order right before launch, because knew it was going to be strong. Loved the title and really loved the attach on downloadable content, which was fantastic.

GamesBeat: I’m looking at a Google trends chart from last week. It captures seven days of mentions — Microsoft and Sony and Nintendo. As you would expect, Sony is at 88, Microsoft at 55, and Nintendo at 13. Does that sound right to you, as to what grabbed attention at E3?

Bartel: Given that you had the new system announced by Microsoft a couple weeks prior to E3, that sounds about right. If you would have looked when they announced the Xbox One without Kinect, Microsoft would have been much stronger. They chose to make sure that wouldn’t be a distraction so they could focus on games. It makes sense to me. They did exactly what they wanted to do, which was to say, “Hey, we said some things last year that we decided not to execute against. We want to use this opportunity, in a very public setting, to talk about the fact that we’re all about games.”

Sony, on the other hand, did a lot of those things last year. They were able to maybe expand their message a bit. 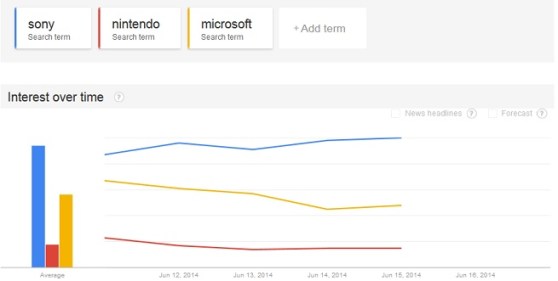 GamesBeat: What did you think of the Halo Master Chief Collection? It seems like an interesting innovation in merchandising, taking something that’s already out there and repackaging it.

Bartel: What it shows is the value of the brand. The Halo brand is a phenomenal brand, beloved by gamers. Microsoft did a great job of updating that. I was caught by two things. One was just the thrill of the crowd when they introduced it. That’s a huge barometer of what people like, when you hear the gamers in there. That’s probably one of the loudest cheers they got.

The other thing is, just from a technology standpoint, they’ve been able to not only upgrade the gamers, but also allow you to go back and play it in that retro mode. Clearly that’s going to be a strong seller for them and for us.

GamesBeat: Do you think of that as something as good as a regular Halo launch?

Bartel: That’s hard to predict, how that’s going to work. It’s a series people want to have in their collection. I think it’s going to be strong. I’m not exactly sure how I would put that up against a Halo 5, though. What you’re going to find is that people love innovation. There’s probably more innovation value in a Halo 5, even though they’ve done some really cool things in the Master Chief Collection.

I think it’ll appeal more to people who will want to put that in their catalog. What we’ve seen with new innovation, like Watch Dogs or TitanFall, we’ve seen tremendous consumer support for those titles. The new innovation around Halo 5 will be stronger.

GamesBeat: What do you think of the continuous threat of digital distribution and the changes that come when you get things like Amiibo, these toys you can also sell?

Bartel: I’m not sure there’s exactly a “threat” in digital. The key is all about consumer adoption. We view it as just another consumer option for purchasing a game. If consumers want it digitally, they’ll be able to get it that way, whether at GameStop or directly through their console. The issue of discovery is still important, whether you’re digital or physical.

The other thing about a digital good that the publishers and platform holders are going to need to consider – and this is something that we see more than anyone else in our customer base – is that people who buy a physical game attribute $20 in residual value to that game. If you have no ability to develop a similar program on the digital side, where you give them that $20 of incremental value for a trade-in credit, then it’s going to be difficult for a digital game to sell at the same price as a new game, or even to sell above $40. As an industry, we need to sort that out.

Given that we make $12 on every physical game we sell, there’s a value proposition that has to be considered there. Customers buy a lot more physical games today. They like that model of being able to speak with someone who can help them discover the game. They like to have a physical disc that they can take wherever they want to. They don’t have to wait for a download at any point. When they’re done, they can trade it in and get some additional value.

If people want to go digital, we believe they’re the best place to buy digitally. They can pay with numerous forms of currency. They can generally talk to someone who’s knowledgeable about the game. They can talk to someone who can walk them through the download process, which is an important piece of the transaction

Talking about the toys, clearly it’s a strong and growing category. They’ve brought innovation into it –Activision and Disney have done a nice job of not only evolving the characters, but evolving their games as well. What we’re going to see from Nintendo is the same thing. Again, there’s a physical factor there, as well as a gaming factor.