Not too many developers can say that their game is a symbol of national pride.

But that’s what happened to CD Projekt Red in 2011 when Polish Prime Minister Donald Tusk handed U.S. President Barack Obama a copy of the studio’s fantasy role-playing game The Witcher 2: Assassins of Kings. Earlier this month, the president returned to Poland during a four-day trip through Europe, where he mentioned the game at a press conference in Warsaw. While he hasn’t played it yet, he said it’s “a great example of Poland’s place in the new global economy, and it’s a tribute to the talents and the work ethic of the Polish people as well as the wise stewardship of Polish leaders like Prime Minister Tusk.”

According to Jonas Mattsson, a senior environment artist for the upcoming The Witcher 3: Wild Hunt, it was the prime minister’s office who first contacted CD Projekt’s marketing department about the gift. At this year’s Electronic Entertainment Expo tradeshow in Los Angeles, I asked Mattsson what his reaction was when he first heard about it.

I remember [executive producer] John Mamais walking around the office with the collector’s edition. You know, people usually come up and say, ‘Hey, sign this. This is for my nephew.’ He came up and said, ‘Sign this.’

So when he came back and he admitted that, ‘I don’t know much about video games, but The Witcher blah blah blah,’ I was like, ‘Yeah, awesome!’ [Laughs]

“It completely took us by surprise,” Mattsson added. “We were so honored, actually, because it’s very unusual for presidents in any country, or kings or whatever, to give gifts to other heads of state like video games. It’d be hard to imagine [British Prime Minister] David Cameron giving Obama [a copy of] Grand Theft Auto V.” 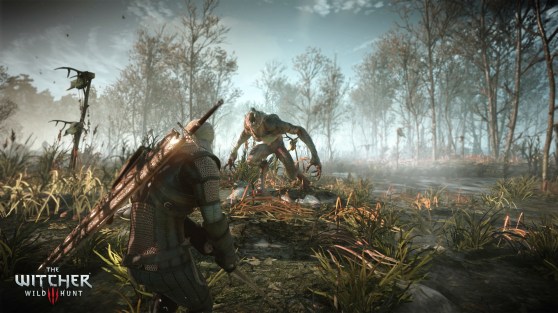 Above: Geralt fights a werewolf.

Will CD Projekt Red give the president a copy of The Witcher 3 when it comes out next February?

“I’d love to,” said Mattsson. “Maybe I’ll be one of those people outside the White House who look up and go, ‘Obaaaama! Let me in!’ [Switches to security guard voice] ‘There’s some crazy guy here. …’”

I suggested that instead of a collector’s edition, they should just give him the wolf-shaped witcher medallion.

“‘Now you’re a witcher!’” he said, laughing. “And [we need to give him] some contact lenses as well.”