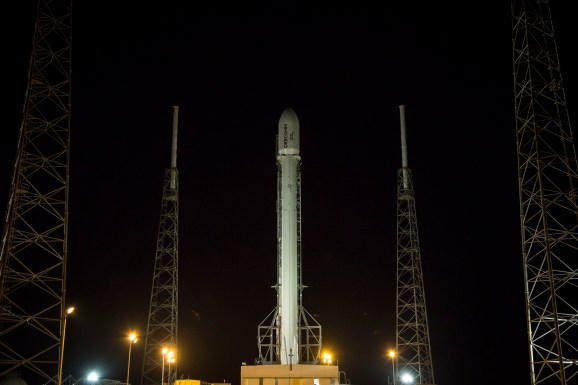 SpaceX moves its Falcon 9 reusable rocket into place in anticipation of its June 20 launch.

After a few delay’s commercial space startup SpaceX is finally launching its reusable Falcon 9 rocket into space today. You can watch via the live video stream we’ve embedded below.

The Falcon 9 is tasked with transporting six Orbcomm communications satellites into orbit, which will provide scientists with a faster and more robust way to transmit data and send messages. The launch was delayed many times back in May due to technical difficulties from both the satellites and the Falcon spacecraft.

This is the second launch for SpaceX under its contract with Orbcomm. The first happened back in 2012, and was deemed a failure after SpaceX’s Dragon experienced an engine malfunction that left the Orbcomm satellites unable to reach the intended deployment orbit. Hopefully, today’s mission won’t suffer any setbacks.

SpaceX is providing a livestream feed of the launch, which is scheduled to begin at 6:08 p.m. EST (3:08 p.m. PT) today. There’s a 57-minute launch window, with the Falcon 9 deploying the first satellite about 15 minutes after liftoff.