When taxi drivers went on strike across Europe last week, one of the things they were protesting was the lack of regulation of one of their most significant competitors: Uber.

The taxi strike was ill-thought-out, since it drove many potential customers right into Uber’s arms. But the protest was founded on solid economics. In some European cities, as we noted last week, the price of a taxi license is upwards of $200,000. 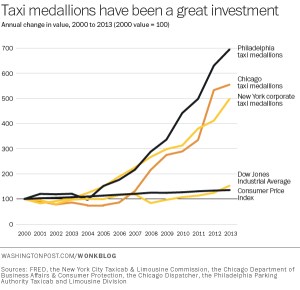 Above: Growth in the value of taxi medallions in various cities.

In the United States, the situation is even starker. In fact, as the Washington Post points out today, taxi medallions (transferable licenses to operate a taxicab) have gone as high as $1 million in New York, or $700,000 in Boston. Their price keeps rising so quickly — and so reliably — that, as an investment, they’ve generally outperformed the Standard & Poor’s 500 index.

Add that to the list of casualties inflicted by Uber’s business model. If Uber cars can operate, and do a decent business, without a taxi medallion, then that takes an enormous capital cost out of the price of starting up a taxi business. It also removes the necessity of buying a medallion, which should drive the prices of these medallions down — a lot.

The Post illustrates the extent to which the taxi industry has been regulated with a great anecdote, showing how everything from the lettering on the cab to the stickers on its window are all governed by city regulations and enforced by steep fines. And it crystallizes the debate neatly:

The taxi industry warns that without medallions, cities will lose their control over an essential public service. Uber counters that medallions have created a cartel that operates for its own benefit — and not in the best interests of the public.

But it’s not just about regulation, public safety, and small independent taxi drivers. Far from it, the Post points out: In cities like Chicago, taxi medallions have created an investment class all to themselves:

Deep pockets run this market. The system in Chicago and elsewhere is dominated by large investors who rely on brokers to sell medallions, specialty banks to finance them and middle men to manage and lease them to drivers who own nothing at all.

Indeed, the Post notes, the medallion market altogether was worth about $2.4 billion in Chicago alone in 2013.

Read the whole story for a great window into how a smartphone-driven technology like Uber can cause enormous ripples, far beyond its immediate application to urban transportation.