A company called Modus Operandi is developing a “social network” interface with profiles of the bad guys who want to do you harm.

Terrorists won’t actually be posting status updates, of course. But they will have profiles that show their pertinent information, updated by American intelligence analysts working in the field, sometimes in hostile environments, said Eric Little, Modus Operandi’s chief scientist.

The Facebook-like site will help those analysts keep tabs on the bad guys. 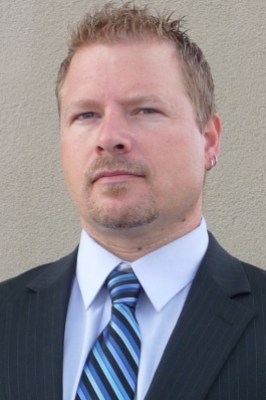 Modus Operandi is based in Melbourne, Florida and counts the U.S. Army, Marines, and Navy as longtime clients.

Modus Operandi has already developed a Wiki-like program focused on terrorists that is in use by the Department of Defense. The rationale behind the company’s new, more Facebook-like technology is that many newly-minted intelligence analysts — some, soldiers just out of boot camp — are 18-19 year-old kids weaned on social media platforms.

In other words, give them what they know.

“It’s for tracking bad guys. If you’re in Kabul, and I’m in Lahore, and you get information about this guy who was in this town at this cafe last week, the information automatically goes into a data graph,” Little said, talking about the Wiki program already in use.

“The power of this is that I’m using a simple user front-end to exchange data in real time. This is powerful if you think about how intelligence actually works. What were really doing is allowing people to find patterns in their data.”

Using Java, RDF and OWL, Modus Operandi developers created the Wiki for terrorists based on the same interface as the Wikipedia we all use today.

Alas, their Facebook for bad guys will work much the same way as the original social network. Analysts will able to add and update posts on somebody their looking to spy on, capture or kill. 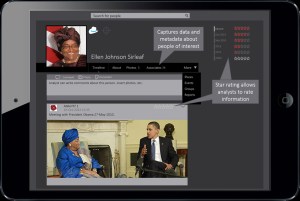 Above: A “Wiki” interface by Modus Operandi

Modus Operandi explained it this way on their website:

“In irregular warfare, often the most valuable information for intelligence analysis is buried in unstructured, or soft, information sources. Modus Operandi Wave automatically identifies key concepts and relationships in unstructured data, tags them, and feeds them to analysts’ tools for correlation and visualization. Modus Operandi Wave frees analysts from tedious reading, markup, and search tasks so that they focus on the big picture.” 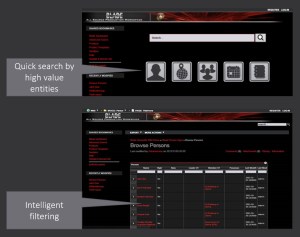 With Modus Operandi’s Facebook for terrorists, young soldiers suddenly thrust into roles as intelligence analysts, sometimes making life and death decisions, can build on existing virtual pages that decision makers use for launching a raid, for example.

Modus Operandi has maintained a fairly low profile for 30 years, and rarely does press. In addition to its headquarters in Florida, it has offices at the Army’s prestigious Aberdeen Proving Ground in Maryland, just down the Beltway from Washington DC.

“Threats are threats,” said LIttle, a former professor who holds a Ph.D. in philosophy. “You need human psychology and logic to put it all together.”