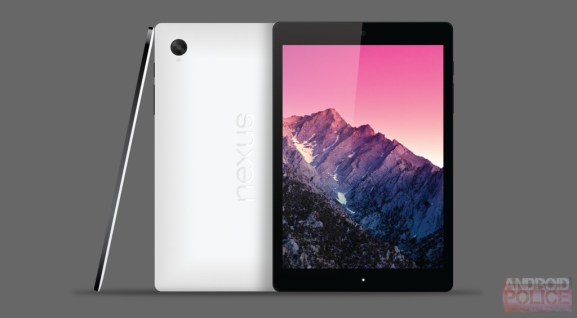 A mockup of HTC's Nexus 9 tablet based on leaked images.

HTC may finally get a chance to build a Nexus device for Google.

The site claims the tablet is being called the Nexus 9 internally at Google, though that moniker could be changed by the time it’s released (past rumors hinted that HTC would be building a Nexus 8 tablet). Google currently has the Nexus 7, its cheap small Android tablet built by Asus, and Nexus 10, a larger tablet by Samsung, on the market.

According to the leaked details, the new HTC tablet will be powered by a 64-bit Nvidia K1 processor (likely making it the first 64-bit Nexus device), 2 gigabytes of RAM, and the next major version of Android (which is rumored to be called Android Lollipop). It likely won’t be available until the end of the year, when Google is expected to show off its next Android release.

In the image above, a mockup of the Nexus 9 based on the leaked documentation, the tablet looks a lot like the LG-made Nexus 5. The leaked description, however, points to some elements not seen in the image, including front-facing stereo speakers (like HTC’s One) and a metallic case.

Google is planning to sell the sell the tablet for $399 with 16 GB of storage and $499 for the 32GB version, according to the leaked plans.