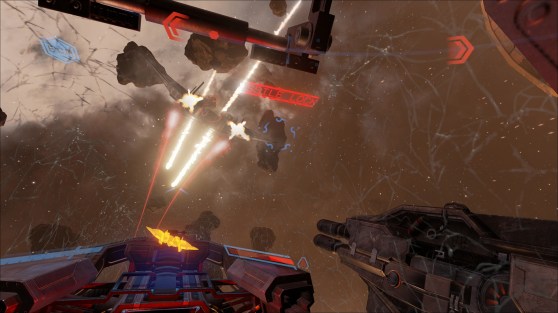 Above: Eve: Valkyrie packs a lot of cool details in your ship’s cockpit.

Until someone makes an official Star Wars: Rogue Squadron game for VR headsets, the multiplayer-only Eve: Valkyrie is the next best thing we have. Developer CCP Games is using the existing universe from its massively multiplayer Eve Online as the backdrop for its space combat game, where you play as a mercenary fighter pilot. Maybe it was because of the futuristic kiosks that CCP designed for the game, but when I pulled the Rift over my head, I didn’t feel like I was wearing an obtrusive piece of technology. It melted away and became a natural extension of my imagination.

I wasn’t wearing a VR headset: I was wearing a badass fighter-pilot helmet. And I was ready for my next battle.

While you still use a controller to pilot your ship, you use your head to aim and keep track of your enemies. That means if you see someone soar past above you, you need to crane your neck a bit and steer your ship in that direction if you want to catch up. That freedom of movement — you can even turn your head around and look at the back of your ship — takes a few minutes to get used to, but it really grounds you in the game’s world.

Eve: Valkyrie is a VR-only experience, so if you’re playing on PC, you’ll need an Oculus Rift, and PlayStation 4 owners will need the Morpheus. 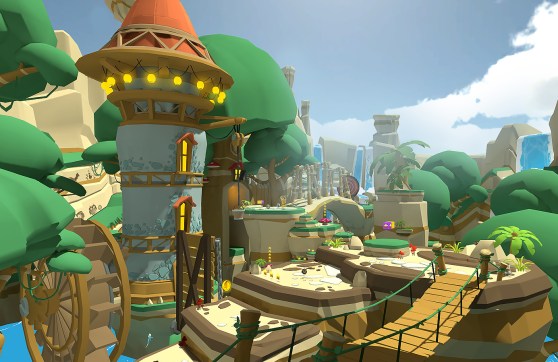 Above: The colorful world of Lucky’s Tale.

Lucky’s Tale is the first VR game I played that doesn’t have a first-person perspective. It’s a platforming game with colorful graphics, a cute mascot (Lucky the fox), and of course, a lot of things to jump on. But since a normal third-person camera (think of the 3D Mario games or Ratchet and Clank) in VR games is the quickest way to get you sick, developer Playful Corp. made the wise decision to use a pseudo-isometric view — you’re not close to the action, but you’re not too far, either. The camera’s always facing north as well, so you don’t have to worry about looking back.

It’s a fascinating perspective. Instead of pretending I was Lucky, I felt like I was with him, like a silent disembodied partner overseeing his adventure. My unique point of view allowed me to see things that Lucky couldn’t, like the entire layout of the level. And whenever he picked up a bomb, I helped him by looking in the direction I wanted him to throw it in. It’s a bizarre concept, effectively making Lucky’s Tale a single-player cooperative game.

After the demo, Playful cofounder Paul Bettner revealed one neat feature I didn’t see that underscores this odd player-character relationship: If Lucky is facing toward you and standing in a certain way, and you look down on him, he’ll actually wave to you and wiggle his nose.

“The way someone would describe Mario or really any other third-person [game] like Uncharted or whatever is ‘I’m Mario,’” said Bettner. “But in this game you don’t ever feel that way, because VR always makes you feel like you. So instead, Lucky feels like this toy that you’re playing with. And so when we saw that moment of connection when he looked up at you, we just immediately realized this is not third-person like ‘I’m projecting myself on the character.’ It’s more like, ‘He knows I’m here, and I know he’s here, and we’re going on an adventure together.’”

Lucky’s Tale is an exclusive launch title for the Oculus Rift. 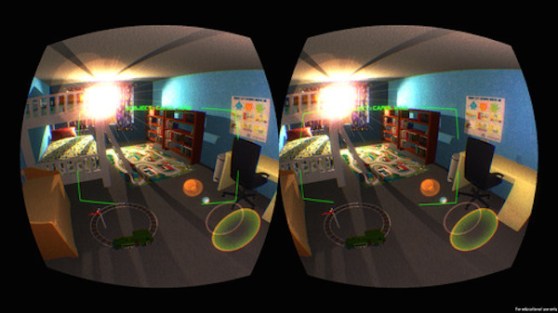 Above: The Oculus Rift allows you to see the “psychological imprints” of the building’s residents.

In Anamnesis, the Oculus Rift isn’t the primary way of playing through the game: You still have to use your PC monitor, too. Made by Alexa Kim and Scott Stephan as a class project at the University of Southern California, Anamnesis takes place in Los Angeles in the year 2020, some time after a devastating plague led to the quarantine of half the city. You’re a FEMA agent investigating the disappearance of two tenants from a temporary shelter. In addition to using some basic detective skills, you also have a pair of special goggles that allows you to see past events through the eyes of the shelter’s residents.

To use the in-game goggles, you hold the Rift up to your face, and to deactivate it, just place it flat on a table. With the goggles on, you’ll see more information about what you’re looking at, or even a completely different scene. One bedroom I entered just had a dusty pile of boxes sitting in a corner, so it didn’t look out of the ordinary. But when I put the Rift on, the gloominess of the room disappeared, and I found out it was actually a children’s bedroom [pictured above]. The goggles will also trigger voice-over moments, which explain a little more about what these people were up to.

Toward the end of the level, Anamnesis took a creepy, almost survival-horror turn. I started seeing angry messages smeared across the walls and floors, and letters that hinted at how desperate some of these people became. It was a cool, if unsettling, experience. Like Eve: Valkyrie, Anamnesis adds a tactile layer to the VR headset, and even goes one step further by providing a narrative reason for its existence in the game. If you already have a Rift, you can play it for free by downloading it from the official website. 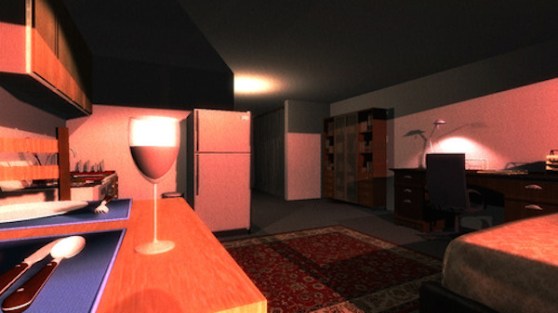 Above: What the game looks like when you’re not using the goggles.