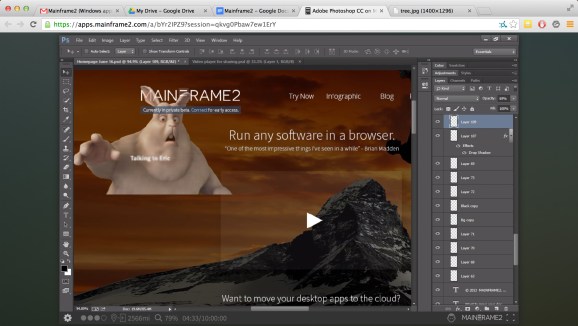 Mainframe2 can run Windows apps like Photoshop in the cloud.

Mainframe2’s technology may be the future of virtualized software.

Not only does the cloud startup promise it can run any Windows software right in your browser, but now it enables multiple people to control the same app simultaneously, the company has revealed exclusively to VentureBeat. Mainframe2 chief executive Nikola Bozinovic laid out a bunch of use cases, from multiple video editors working on the same film to data scientists collaborating on a visualization.

But this type of collaboration is only the beginning, promised Bozinovic.

“Moving forward, we envision — and are already working on — a platform that will allow people to build apps that have true sharing capabilities, similar to what you have in Google Docs,” he said.

If each person could affect the same data from a different viewpoint, that opens up all sorts of new possibilities. Graphic designers could modify different layers of the same image. Architects could build out different rooms on the same model. Everyone involved would have a real-time view of the progress.

“That is very far ahead,” admitted Bozinovic, “but we’re working very hard to build Mainframe2 into a true development platform.”

Unlike GoToMeeting, which enables presenters to share control of their keyboard and mouse with participants — and thus, local apps — all Mainframe2 software runs in the cloud. That means rather than than controlling someone else’s app through an uplink connection, people working through Mainframe2 get a fast downlink connection piped from the nearest Amazon Web Services (AWS) data center to their device.

“It really plays to our vision where apps run faster in the cloud than they would on local computers because they have better CPUs, better GPUs, [and] faster disks,” Bozinovic said.

Beginning a multi-person session on Mainframe2 is as simple as copying and pasting a link to someone else, similar to how you’d share a file on Dropbox. Then the other person can click and immediately begin to control the app. It works with two or more people for any app on Mainframe2.

We tested it out with Photoshop, and it worked great. Bozinovic and I screwed around with the Mainframe2 homepage design. Actions like typing text, dragging layers, and cropping images felt responsive and snappy, even though my laptop was connected to servers 2,700 miles away — a testament to both Mainframe2’s video encoding wizardry and AWS’ powerful cloud infrastructure.

Mainframe2 supports native Windows applications, so software vendors don’t have to rebuild their apps for the web in order to run them on Mainframe2. After software makers complete a quick install process — it only takes 10 minutes, claims Bozinovic — Mainframe2 can deliver their app to any HTML5-equipped web browser, whether it’s on a PC, tablet, or a phone. Mainframe2 runs the apps in remote data centers then converts each frame to H.264 video, which the service pipes over the web to your browser.

Mainframe2’s end goal is to make science and engineering applications available to everyone with an Internet connection (and perhaps a bit of cash to spare). In the process, software vendors can turn their Windows apps into service-based businesses.

Since emerging from stealth mode last October, the startup has launched its paid early access program. Mainframe2 has about three-dozen customers on the system so far, including organizations like the IntelliCAD Tech Consortium and network visualization firm Nupsys, according to the company. It plans to onboard more customers as capacity increases, said Bozinovic.

It also intends to bring more cloud vendors into the loop. Right now, it works exclusively with Amazon Web Services, but it wants to offer its service on every cloud, including Google Cloud, Microsoft Cloud, and IBM SoftLayer.

“For all its might, Amazon is not everywhere,” said Bozinovic.

“In the U.S., it’s East Coast and West Coast, so if you’re in Chicago or Austin, you may be better served by a Rackspace or Microsoft data center.”

Mainframe2 has 15 full-time employees split between its headquarters in Menlo Park, Calif., and a separate office in Serbia. It has taken $650,000 in seed financing, according to the company, and began generating revenue in January. The company will be profitable next quarter, asserted Bozinovic.

The key, said Bozinovic, is a seamless experience.

“We clearly understand the value proposition behind this just works, and we spent a majority of our engineering time making sure this works wherever you are, under whatever circumstances.”