If you end up grabbing drinks with Gearbox Software at one of the major video game industry events throughout the year, you have an 80 percent chance of making a new Borderlands game. If you’re already friends with the people there, that number jumps to 100.

At least that’s the impression I got when I talked to the studios behind Tales from the Borderlands (out this summer) and Borderlands: The Pre-Sequel (out Oct. 14), two games coming to PC and consoles that aren’t being made by the studio that built the original series. They couldn’t be more different from one another. Tales is an episodic adventure game from The Walking Dead and The Wolf Among Us developer Telltale Games, and 2K Australia is making The Pre-Sequel, an open-world first-person shooter that closely follows its predecessors. The chronological timeline of the series goes like this: Borderlands, The Pre-Sequel, Borderlands 2, and Tales from the Borderlands.

Seeing publishers assign spin-off games to other studios isn’t new (we saw it last year with Batman: Arkham Origins and Gears of War: Judgment), but this situation seems unique to Gearbox and the companies it chose. Budding Borderlands developers, take note: The two key ingredients you need are a large get-together and alcohol. 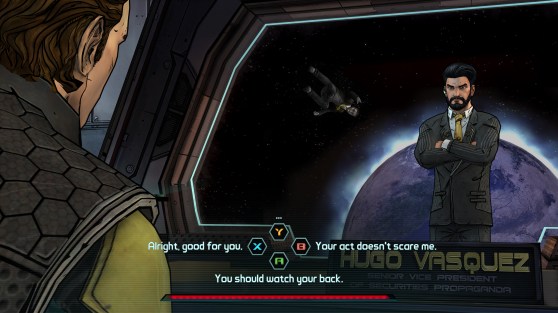 Above: Tales from the Borderlands will look familiar to anyone who’s played Telltale’s dialogue-heavy games.

The idea for Tales from the Borderlands began almost two years ago after a night of celebratory drinking.

“When we announced it, we kind of joked that when we were at the [Spike TV Video Game Awards] — we all [had] won really big that night in 2012 [for The Walking Dead] — [us and Gearbox] went out for some tequila afterward,” recalled Job Stauffer, the director of public relations at Telltale. “The next thing we know, we wake up, and we both signed on to make this game. It’s kind of a half-truth. Maybe the truth is somewhere in between there. But [finding the truth is] actually kind of the theme of the game.”

In Tales from the Borderlands, you’ll flip back and forth between two characters: weary corporate drone Rhys, and the con artist Fiona. They’re both telling the same story — albeit with their own lies and embellishments — to the Stranger, a neutral character who summoned them. I watched the first 30 minutes of the game at the recent Electronic Entertainment Expo tradeshow in Los Angeles. The demo mostly showed the first part of Rhys’s story, where he (hilariously) painted himself as a brave hero before Fiona butted in, saying he was completely wrong.

The decision to split the story into two distinct perspectives was partly because of Telltale’s work on The Walking Dead: 400 Days, a standalone episode that bridged seasons one and two. The downloadable chapter tells a series of five short stories, and each of them has a different set of characters.

“Everything we do influences the next thing,” said Stauffer. “Even right now with The Walking Dead Season 2 and The Wolf Among Us, each episode of those two separate seasons can influence the next episode of a separate project on different storytelling techniques, the things we’re doing with our engine and toolsets, our storytelling devices. All sort of tie into each other.”

Though it was Telltale who wrote the script for Tales from the Borderlands, it’s also working closely with Gearbox’s writers. The two studios have been “constantly” visiting each other throughout Tales’s development. 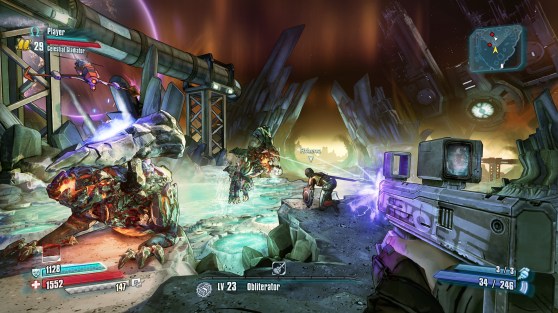 Above: Players will fight moon monsters in The Pre-Sequel.

Collaborating on the moon

The fortuitous meeting that led to Borderlands: The Pre-Sequel happened during the 2013 Game Developers Conference in San Francisco. Gearbox and 2K Australia are big fans of each other’s games, and they decided that they should do something together. At the time, 2K Australia had just completed its work on BioShock Infinite, and Gearbox was making downloadable content for Borderlands 2.

“We had just done this big analysis of different ideas for things we can do with the Borderlands universe,” said Gearbox producer James Lopez to GamesBeat. “And one of the big things was the moon. [2K Australia’s] schedule made it possible for us to collaborate together. We knew that we wanted to do something on the moon, and they just kind of ran with it.”

The first two Borderlands take place on Pandora, a lawless planet filled with crazy bandits and monsters who want to kill you. The Pre-Sequel puts you on Pandora’s moon, and while this also has plenty of baddies to hunt down, it tweaks the shoot-and-loot formula by adding low-gravity. Now players can jump high in the air and crash back down with a new butt-stomp attack that damages multiple enemies.

According to Lopez, the timing of The Pre-Sequel and Tales from the Borderlands was “largely coincidental.”

“The effort with Telltale was also sort of this cool thing that happened,” he said. “We’re really big fans of their stuff, too. They’ve got really talented writers, and a fantastic team over there in general. So I think this kind of happened this way. But it’s really cool because we are doing new things in both games.

“Tales is a way of exploring [what we can do] with Borderlands without the first-person shooter element. In The Pre-Sequel, we’re doing all these different modifications to the combat system: Can we do these things and still [make it] feel like Borderlands? The answer is yes. [2K Australia] has done a fantastic job of making the gravity system, the oxygen system, the ice elemental, just make it all feel like they belong there.” 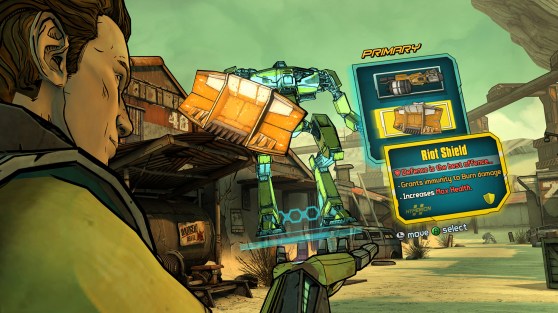 Above: Rhys defends himself with a loader bot in Tales from the Borderlands.

Are two Borderlands games too much for 2014? Other companies like Ubisoft and Activision love annualizing their games, and while publisher 2K Games doesn’t look like it’s heading in that direction with Borderlands, it’s rare to see two games from the same franchise in one year. For now, Gearbox seems satisfied with the results.

“We definitely have a lot of ideas for cool stuff at Gearbox, and it’s really nice to have someone who we can trust to explore ideas with us,” said Lopez. “We’re really excited about seeing what someone else could do with this franchise.”