Virtual reality may be the wave of the future whether you like it or not. Chances are that you actually will dig it, but your children are gonna love it.

Research firm Dubit recently conducted a focus group with young kids to see what they think about the Oculus Rift virtual-reality headset. The company gathered 12 children between the ages of 7 and 12 and had them try a number of different experiences in one of the Oculus Rift developmental test kits. Turns out that kids really like spending time in simulations, and many preferred it over traditional games.

“The overarching message from our sessions is that children love using Oculus Rift and felt immersed in the games in ways they’ve never felt before,” Dubit head researcher Peter Robinson said. “Comments along the lines of it being the best way to play games were common.”

Of course, they only felt that way until they started projectile vomiting from motion sickness, right? Wrong.

“We were glad to see that none of the children in our groups felt dizzy or ill after using the headset,” said Robinson. “The only usability issues occurred when the children had to move their heads to look down and found the headset heavy. A couple of younger children also reported fitting issues with the head straps.”

Dubit was testing the kids with the first generation Oculus Rift dev kit, which is heavier, bulkier, and less impressive when it comes to immersion than the unit Oculus VR will eventually release to consumers later this year or in 2015.

If the final product does work out the weight and wearability issues, Robinson predicts that children will take to virtual reality with little hesitation.

“Oculus VR may not see children as their core market but there’s no doubting the device’s potential popularity with kids,” said Robinson.

Oh, and kids think the device will cost around $700. Oculus is selling its latest dev kit for $350, and the final unit will likely sell for even less.

So we know that kids love virtual reality, but should they? We currently don’t have a lot of evidence that says they shouldn’t. People studying the subject today, like Standford professor Jeremy Bailenson, have shown that the technology is capable of increasing empathy in subjects. Other studies use VR to treat young kids with autism. Another experiment found simulations could benefit children with cerebral palsy.

We are already starting to see the positive possibilities, but no one has come out to say here are the terrible things that will happen to kids who spend time in VR. That may still come.

Dubit didn’t stop at whether or not kids would like virtual reality. The firm wanted to hear if young people think the technology has a place outside of gaming. They nearly all immediately jumped to using Oculus Rift to improve their classrooms.

“Without prompting, all children said they thought virtual reality would be great in their schools,” said Robinson. “They thought it would make lessons more interesting and enable them to take virtual field trips.”

The kids gave examples like going back in time to talk to the captain of the Titanic. They also placed an emphasis on exploration. These children want to discover things — and in an active manner — in their educational experiences. 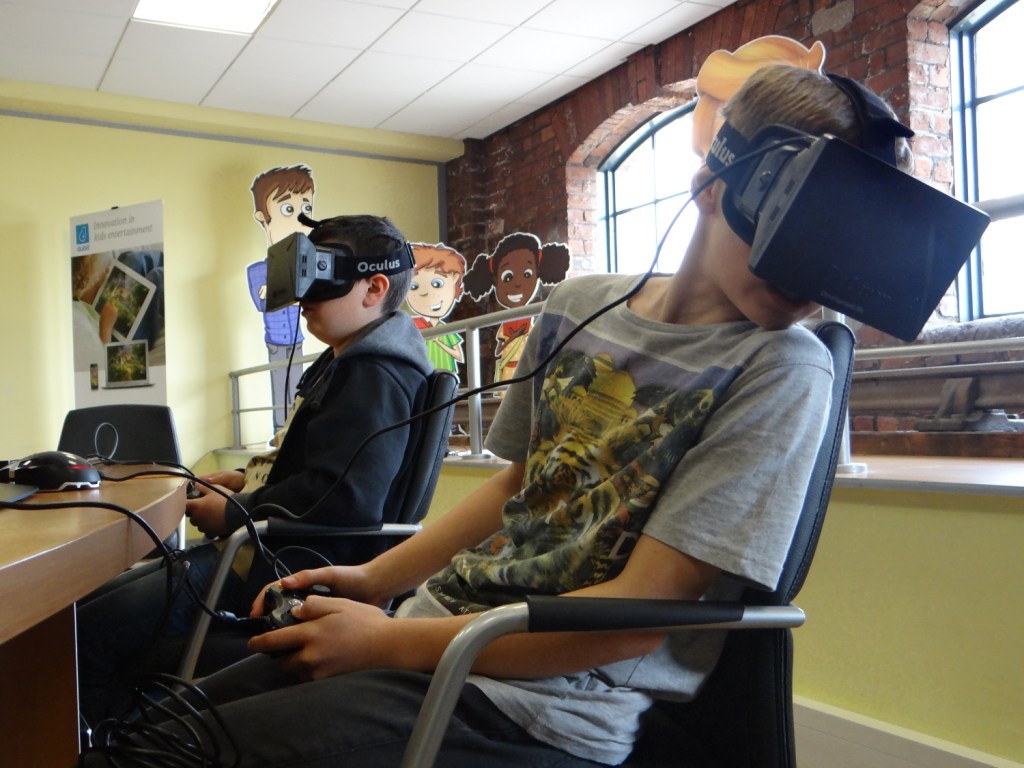 Above: More kids in the Dubit focus group.

Naturally, the idea of exploration led kids to wonder what Minecraft would feel like in the Oculus.

“It’s striking how much of an impact Minecraft has had on children’s gaming expectations,” said Robinson. “While most of the children wanted to see Oculus Rift used in first-person-shooter games, like Call of Duty — yes, even the young ones — it was games that allowed them to explore, like [The Elder Scrolls V:] Skyrim, or create, like Minecraft, that came up time and time again as being great fits for virtual reality.”

Robinson noted that his team didn’t have the heart to tell the kids that Minecraft creator Markus “Notch” Persson has refused to put the phenomenally popular block-building game on the device since Facebook purchased it in March for $2 billion.

Finally, Dubit tested the kids with a variety of control schemes.

“Xbox pads were the most familiar to the children and the preferred control method,” said Robinson. “Unless games were meant to be passive, like the rollercoaster simulator, in these cases they were happy to have no control.”

While the young gamers were happy to use traditional control methods, in the end most of them agreed that Oculus would likely need something innovative to match the Rift’s new way of playing games.

That may happen, as Oculus VR announced today it is acquiring the design firm that created the Xbox 360 controller.