Withings describes its new Activité watch like this: “The first Swiss made watch that happens to be an activity tracker.”

And that’s the coolest thing about this watch. There’s no longer anything novel about fitness tracking wearables: It’s just a set of features that will very soon be subsumed into a wider set of features offered by mainstream smartwatches.

The watch, for starters, has an analog dial, with real hands, not a digital one. The accelerometer-based activity tracker built into the watch monitors steps taken, calories burned, distance traveled and sleep patterns. The Activité also builds in a second dial on the front of the phone that tells you how close you are to reaching your daily fitness goal.

Withings founder and chairman Eric Carreel tells VentureBeat that his company’s decision to rely on analog dials for its display is significant.

Withings focused on the materials and design of its new watch, and ended up with a device that people would probably be willing to wear even if it contained no “smart” capabilities.

At $390, the Activité costs quite a bit more than other smartwatches, like the $250 Pebble, or fitness trackers, like the $100 Fitbit Flex, but there’s a good chance people will pay the extra money for the elegance and design.

Nina Garcia, creative director of Marie Claire Magazine and Project Runway judge, said this about the Activité, in Withings’ press release: “It’s unlike any smart watch I’ve seen, a true style accessory and one of the most wearable wearable out there. This is a really exciting time in fashion, which until recently has not been on speaking terms with technology.” 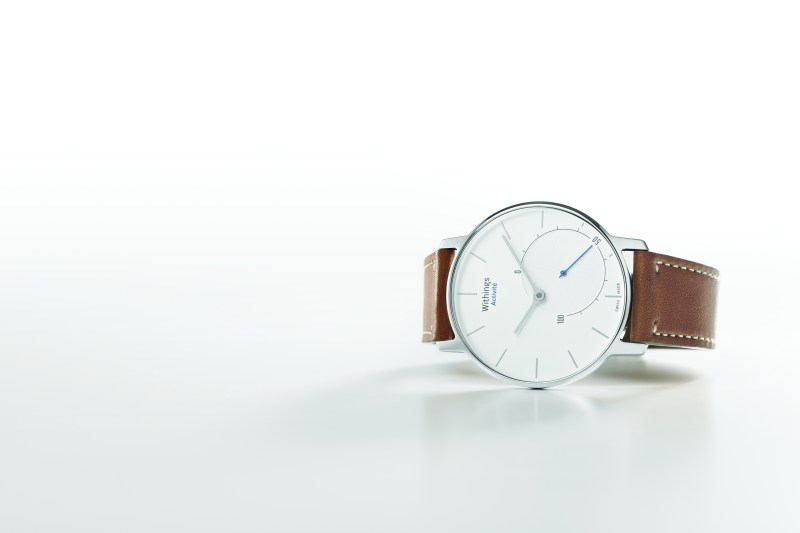 The new watch, and all of Withing’s wearables, reports its information into an app called HealthMate, which runs on both Android and iOS. This is wear users monitor their progress, manage their data and set fitness and sleep goals, Carreel says.

The Activité, which is available in silver and black, was designed in Paris and made in Switzerland, the luxury watch capital of the world.

The watchcase is made of stainless steel, with a crystal of unbreakable sapphire glass which includes touch screen capabilities to tap between modes. It has a fine leather strap, and it comes with an interchangeable plastic strap for underwater use (the watch is waterproof).

Carreel points out that one of the main reasons people stop using their smartwatches is that they have to recharge the devices every day or so. Carreel stresses that because the Activite´ uses a standard watch battery it won’t need constant recharging, only a battery replacement every year or so.

The watch connects to iOS devices through Bluetooth Low Energy.

The watch will go on sale at selected retail outlets this Fall.