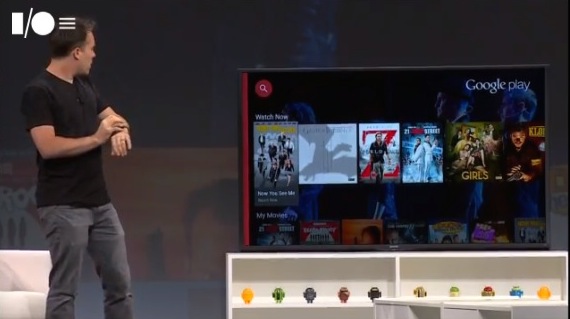 Android TV is not to be confused with Google TV, the company’s earlier, failed attempt to build a platform for interactive televisions.

On stage at the company’s Google I/O 2014 today, Google promised that this is not a new platform for entertainment, but rather a more cohesive update that ties together features and devices that make consuming content easier.

One way Android TV is doing this is by transforming Android smartphones into your remote control — a concept we first got acquainted with thanks to the company’s Chromecast device, which lets you “beam” streaming video content from an Android phone or tablet to a small dongle plugged into your TV’s HDMI port.

Like Chromecast, Android TV-enabled set-top boxes and smart TVs will now gain the ability to screencast, or being able to “cast” something you’re watching on your phone to your TV set — no dongle required. There’s also the option of using an Android Wear-powered smart watch as a replacement remote, which is something we’ve not seen up until now.

Google seems to be putting a heavy emphasis on making search and navigation better, which is usually the most frustrating thing about interacting with software on a television set. Of course, I recall search being one of the big selling points the last few times the company demoed a new version of Google TV and was mostly unimpressed. At least with this version we have several different options for navigating through content, including smartphones, wearable devices, and voice search.

But as Google learned when it initially debuted Google TV years ago, to make the search function useful you need access to content. That said, Android TV features apps from Netflix, YouTube, and content purchased from the Google Play store. There’s also support for live TV, casting mobile games to your television screen, and a library of reference information about movie and TV shows like Amazon’s X-Ray feature for its Fire devices.

Also, Google will continue teaming up with hardware makers as it previously did with its Google TV operating system, including Sony, which apparently decided to integrate Android TV into its entire line of smart TVs.