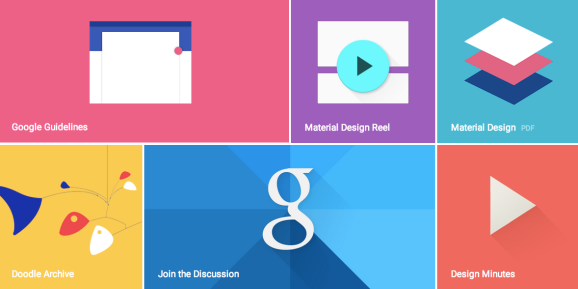 Today at I/O, Google revealed the guidelines for its new “Material” design language, a system that will influence the design of every Android app going forward.

Material looks a lot like Microsoft’s Windows 8 and Windows Phone 8 design (formerly known as “Metro) in its reliance on large squares and rectangles with full-bleed images (images that go right up to the edges of the squares, without any “chrome” or window borders). Instead of icons and windows, it’s all big, bold squares.

Also echoing Microsoft: The way Material tiles seem to surface live information from the apps they represent — for instance, showing the details for your next appointment on the calendar tile.

In terms of the color schemes, Material echoes Apple’s iOS 8, integrating vibrant, almost neon colors into the heart of the OS.

The video below reveals how the Material design language works across all devices Google touches, from smartphones to Glass to wearables.

At Google we say, “Focus on the user and all else will follow.” We embrace that principle in our design by seeking to build experiences that surprise and enlighten our users in equal measure. This site is for exploring how we go about it. You can read our design guidelines, download assets and resources, meet our team, and learn about job and training opportunities.

Here’s a look at the guidelines in full:

The new guidelines also reveal how Google’s Cast UX works, an extension of the technology that powers Chromecast.