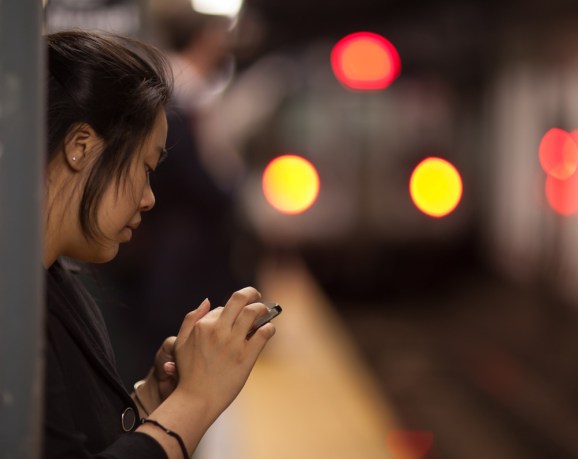 A woman uses her iPhone while waiting in a New York City subway station.

Extending the Fourth Amendment, the Supreme Court ruled today that police need a warrant to access the content on your cell phone.

The court’s decision applies to both simplistic handsets and smartphones.

The unanimous ruling follows two controversial phone search cases that landed in the high court back in April.  In both cases reviewed today, mobile phones containing or leading to the retrieval of criminal evidence were accessed without a warrant. In the first case, David C. Riley was pulled over by police for driving with expired registration tags and found to have a suspended license. Police seized his phone, impounded and searched his car, all without a warrant. Information on Riley’s cell phone led police to arrest and charge him in connection with a shooting that happened a few weeks prior.

In the second case, Brima Wurie had already been arrested for selling drugs when the police seized and searched his phone. The police traced a phone number that had been calling Wurie’s phone repeatedly and obtained a warrant for the address. The resulting search yielded a bounty of firearms, ammunition, drugs, and cash, ultimatey leading to Wurie’s conviction.

Previous attempts by both Riley and Wurie to suppress evidence found on their cell phones had failed.

According to Chief Justice John Roberts, “modern cell phones are now such a pervasive and insistent part of daily life that the proverbial visitor from Mars might conclude they were an important feature of human anatomy.”

Chief Justice Roberts clarified that the decision today “will have an impact on the ability of law enforcement to combat crime.” But, Roberts insists, “privacy comes at a cost.”

The court did, however, leave room for “exigent” — or unusual — “circumstances,” a move that weakens the otherwise clear-cut ruling. That is, police could access cell phone content in situations in which they believe a cell phone search might “warn officers of an impending danger.” For instance, the dissenting First circuit judge argued that a “exigent” case could have been made for Wurie. Not only had Wurie been arrested in conjunction with a drug sale, but someone titled “my house” in Wurie’s phone was persistently calling.

Make no mistake, this ruling is a major one — even with the wiggle-room granted for immediately dangerous circumstances.

Here’s the ruling, in full:

In other news, the Supreme Court also ruled against TV streaming service Aereo today, after a long fight with broadcasters.