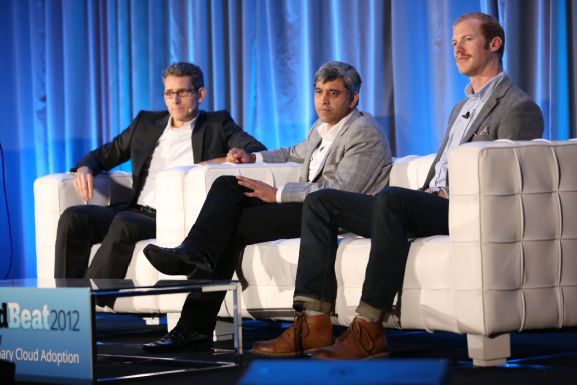 SAN FRANCISCO — Google seems more and more determined to take big money from large businesses through its cloud services. Now it’s got a bunch of plans to make that desire a reality.

“Enterprise is now a big bet for Google,” Amit Singh, the president of Google Enterprise, said during a press conference yesterday at the 2014 Google I/O developer conference here. “We’ve been focused on building out our teams on the product side as well as sales and marketing side.”

Not that Google wasn’t busy before. The technology giant has been putting out more products that developers can use to run their applications in Google’s burgeoning public cloud.

Now the company is trying to execute faster and improve its reputation as a company that big companies want to do business with.

Google has been gaining key certifications that can reassure companies they won’t run into legal issues for using Google’s cloud. It’s been building more data centers out of which the company’s cloud can function. And yes, it’s been dropping prices like they’re hot — and trying to simplify its cloud cost model.

But it’s a matter of who’s working on this stuff. The company has made internal staffing changes.

“We now have several thousand Googlers directly calling the customers,” Singh said. “That’s their job. That used to be a fairly modest few hundred people.”

Google has also tapped more and more companies to join it in its mad dash to the enterprise.

“We’ve signed up some of the biggest SIs [software integrators] in the world,” Singh said, as well as “ISVs [independent software vendors] that connect with our product.”

Indeed, Google is amid a slew of other projects that will help big companies check off more boxes on their checklists.

Google is in the process of becoming compliant with PCI (payment card industry) standards, which would make the Google cloud viable for processing credit-card transactions, said Greg DeMichillie, the director of product management on the Google Cloud Platform, during the press conference.

And support for “new operating systems” is coming to the Google cloud, too, DeMichillie said.

“The demand is there,” Singh said. “It’s not about demand. People want to use our infrastructure to build their next-generation customer experience, all the way to games, and so we’re going to build all of those things.”

For Scott Ottaway, an analyst covering cloud and hosting at 451 Research who was in attendance at the press conference, it sounded like Google was heading down the right path. Trouble is, he told VentureBet, “they are just so far behind on any metric.”

For instance, Ottaway said, Google lags other cloud vendors when it comes to revenue, the number of enterprises on board, or the percentage of IT spend that goes to it.

But even though Google lacks enterprise DNA, Ottaway said, the company has been moving quickly to remedy that — witness the continuing Chromebook push and the growing adoption of Google Apps.

Over the next three years, Ottaway said, it should be interesting to see how Google progresses in its quest to win enterprises over — not just developers at startups and web companies but IT operations people and heads of entire business divisions.

“They need an enterprise sales force to do that, and they’ve got that,” Ottaway said.

In other words, let Google do its thing for now. Its enterprise cloud efforts are still in the development stages; the dearth of big-name customers is a reflection of that.

But Singh didn’t seem unhappy at the current state of things.

“We’re definitely very excited about all the demand were seeing on all cloud fronts,” he said.