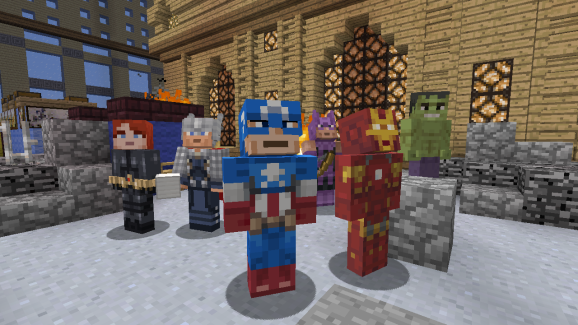 Captain America and the Avengers in the Xbox 360 version of Minecraft.

If you want to build something great in Minecraft, you do it one block at a time. For example, developer Mojang sold one copy of Minecraft at a time — and now it has millions of players.

The studio revealed yesterday that it has sold nearly 54 million copies of Minecraft across all platforms. Mojang data analyst Patrick Geuder also announced that the PlayStation 3 and Xbox 360 versions passed the PC and Mac versions in terms of copies sold. This comes just a few months after the game finally debuted digitally on PlayStation 3 in December.

According to Mojang’s website, more than 15 million people own the PC and Mac version of the game. In April, the company confirmed that more than 12 million people own the Xbox 360 version, which means the PS3 release is already nearing 3 million copies sold. Both of these numbers are on top of Minecraft: Pocket Edition’s sales on iOS and Android, which is around 16.5 million as of April. That makes the $6 mobile release the best-selling version of the game.

Minecraft isn’t done dominating the sales charts. The PlayStation 3 just got a retail-disc version. The Xbox 360 retail disc debuted last year, and it was the ninth best-selling physical game at retail in 2013.

Mojang is also working on Minecraft for PlayStation 4, PlayStation Vita, and Xbox One. All three should debut in August. Not only will that give the game a new audience, but the PS4 and Xbox One both include built-in video-streaming features. This should increase the number of Minecraft videos that will help continue to spread the game.